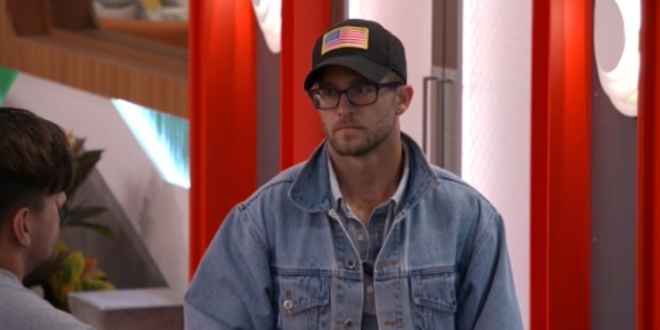 It’s officially the first full day of live feed blogging which means you’re stuck with me for another 90 somewhat days!  This summer, I will be working a little (bills still need to be paid), but the blog should not suffer like it did during Celebrity Big Brother. I know a lot of people were disappointed in my lack of coverage with that show, but between missing the first week and the weird feed format, I just didn’t get into it myself. Fear not, the same won’t happen for Big Brother 20!

This cast has already jumped out to a hot start as it predictably divided and appears to be staying that way for the time being. As of now, there is no one major power group that just bullies potential eliminated players until they leave, so that’s refreshing.  Alliances are still slowly being developed, but showmances are already starting to form. Tyler has been pretty flirty with a few girls, and Swaggy/Bay have been making out a bit.

The biggest surprise is that Sam is currently the overall target and Steve may not be the first to be evicted.  Today will give us a better indication of where things really stand in the house!

Be sure to sign up to the live feeds to help win me a trip to be in the audience this season!  I need to go back to LA!

Note – I disabled private messaging and the entire ‘buddypress’ plugin. It appears it was compromised and that is what allowed people to send out mass messages about dating or something weird. I think the most used feature out of that was custom avatars so I changed the avatar system to still allow you to upload custom avatars without using that horrible Gravatar site.  Please let me know if there are any issues.  I understand how important this site is to being a Big Brother community so I am going to try to keep figuring out something but for now this is the best I can do

Ok, heading out for real this time. I will likely be back after the PoV competition is over so please share spoilers in the comments to keep people updated!  Thanks!!

I blog stuff about Big Brother
Previous Spoilers – Feeds Up! Here Is What We Know
Next How To Add A Custom Avatar
Subscribe
Login
28 Comments
Newest
Oldest Most Voted
Inline Feedbacks
View all comments