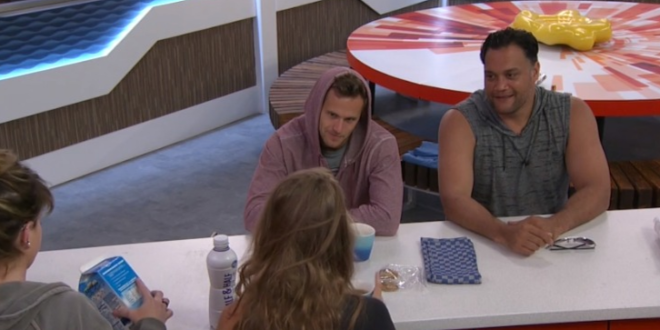 Good afternoon, everyone. I hope everyone had a great weekend!  It’s still a fairly slow start to the season but things will heat up soon, I promise.

Tensions are building between the bros and Swaggy to the point where Swaggy walked by Winston and made machine gun noises at some point yesterday. I’m not sure what that is supposed to mean, but I’m sure it made Swaggy feel better.

Sam’s power was revealed on the CBS episode last night and there is a note many have overlooked. It says it will give her the chance to return to the house. That means she’s not safe and can be evicted this week if she’s voted out. It also means there likely won’t be a full battle back competition this season as there was in recent years. My best guess is that there will be something in the app store (maybe a punishment?) that the person has to challenge whoever redeems Sam’s reward after week 4ish. Perhaps the person who gets the punishment can be evicted if she loses to Sam, although that seems a bit extreme. It will likely be similar to BB19 where Paul faced Cody.  Or it could just be Sam competing against herself, but either way, it will likely be easy enough where she does re-enter.

Alright, let’s see what’s going on in the house…