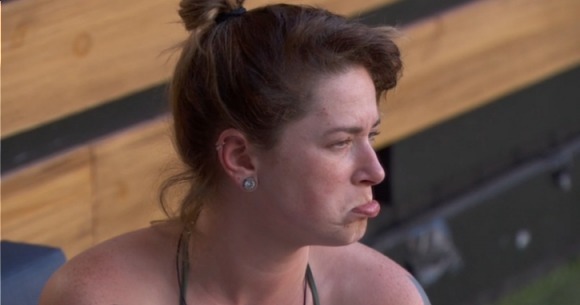 Good afternoon, everyone!  Ready for a fun day?

Another ceremony, another blindside. That’s Big Brother 20 for you! This time it will be Bayleigh who is blindsided as she has been expecting Fessy to be the replacement nominee today when Angela uses the power of veto. The problem is that it will likely be Bayleigh who is put on the block and the target for the week.

Why?  Because the entire house knows that she has a power she hasn’t used and they want her gone before she has a chance to use it.  Look at this in the big picture – Angela learned about Bay’s power, so she had Brett expose the power at the eviction last Thursday. Because it is now exposed, Angela gave herself a reason to nominate and evict Bayleigh. She gets out a super strong player with a power and really doesn’t get any blood on her hands. The only thing stopping this from becoming a super genius plan is that Angela obviously couldn’t predict that she would be the one who won HoH this week.

No bullying, no bitchiness, just flat out good gameplay right there.

Now, Angela can go and screw up the rest of the season, but I give her first HoH run a solid ‘A’ grade and arguably the best of the season just sneaking by Scottie’s (going straight after two strong targets then winning PoV over them was a pretty badass move on Scottie’s part)

Seeing as today should be a fun day to watch the feeds, I’m going to toss in my links below:

Oops, I fell asleep. Nothing major has happened and no Angela/Bay drama yet. Going to keep an eye out for that, but I’m starting up a new thread since this one is nearing 300 comments (!!!!!!)

Continue to next thread here