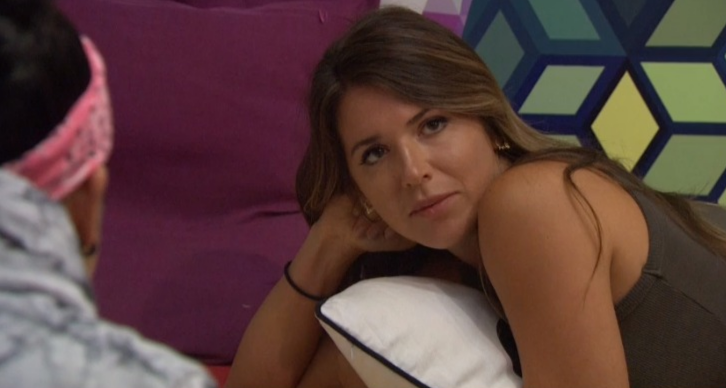 Good morning everyone! It was a slow day in the BB house yesterday but as usual, there were a few things going on that could be relevant down the road. I’ll add a few things that aren’t relevant to anything at all just because….why not? The two main things going on are cover stories for why people are voting out Rachel and Fessys strange method of playing a game of pool.

I have to go back a little earlier in the day to help explain why Fessy is turning into a powder keg. We’ve already discussed what a bossy nightmare Bayleigh is as the HOH but she’s also a relationship expert. Bayleigh suggested Hayleigh spend more time with Tyler and later told Fessy she was worried because Haleigh was spending time with Tyler. Bayleigh also has a habit of backing Hayleigh up when she wants to tell Fessy to shove it.  Bayleigh and Fessy talked about how immature Hayleigh was and Bayleigh said she thought Haleigh was ‘up to her old ways’ or something like that. She said Haleigh didn’t appreciate what Fessy did for her (using the veto) and pumped Fessy up with all the things he was already feeling. She told Fessy she didn’t want to take Hayleigh to the end if she was going to behave this way. Fessy said that was an issue for later but not now.

Bayleigh is behaving like Kaitlyn in the sense that she wants to be everybody’s #1. (Tyler, Fessy, Kaycee, Angela, Scottie, etc.) Tyler uses a little of the same strategy but here’s the difference….Tyler can keep his mouth shut. Hayleigh and Fessy were already having problems but this made it worse throughout the day. Haleigh’s usual approach is to talk to him about it, remind him she didn’t want a shomance and when he starts having a tantrum, she walks away.  I’ve made comparisons between this situation and Caleb & Amber from season 16. The biggest difference I see is Hayleigh doesn’t take his shit. She very clearly tells him ‘this is who I am and if you don’t like it, it’s too bad for you.’

Along with Bayleigh’s amazing relationship advice, she found time to tell Rachel more details about her power app. The only thing big mouth Bay had in her pocket was that she had to pick her noms before the ceremony and now, Rachel knows this too. Bayleigh told some of it wrong and Rachel has some of it confused but there’s enough out there for Bayleigh to lose the advantage. Rachel told Tyler she needed to talk to him about something Bayleigh told her. She’s planning on telling him about Bayleighs power (which he already knows) but I don’t think that conversation’s happened yet.

Bayleigh talks so much, she doesn’t know what she’s said to each person. She decided yesterday she wanted this to be a unanimous vote to evict  Brett.  This is after telling several people she didn’t care who went home.  She hasn’t made the rounds dictating these new terms to the house peasants. She makes up a lot of conversations that didn’t happen. I could understand if she did it for strategy but I just think she does it to be talking. Her alliance knows she wants a unanimous vote but the other side hasn’t been given this new order yet.

Speaking of alliances, we have some new official ones to bring up. Foutte is dead and I’m glad because it may be the dumbest name in BB history. Rockstar, Hayleigh, Bayleigh, Fessy and Scottie have formed the “Hive.” (Yes, Scottie is finally included, he named it) Bayleigh thought it was a great name because she said she was the queen B.  She did at least concede someone else could be the queen B next week. (She’s never going to allow this to happen tho) The night before Bayleigh, Hayleigh and Rockstar also formed their F3 alliance, BASH which stands for “be awesome stay humble.”  (This was during the conversation when Bayleigh was explaining to them they were basically rejects that she got stuck with because of Swaggy.)

Haleigh spent A LOT of time in the hammock with Brett last night. I could see Haleigh taking some possible blame for the flip vote JC is planning on blaming on Scottie this week. The same thing happened the week Swaggy left. Foutte couldn’t decide if it was Haleigh or Scottie for a time. Fessy spent his time pouting and playing games of pool that looked similar to baseball or croquet. He and Rockstar had to keep walking the yard and collecting balls after he’d take a shot. (1 inch pony was mad ya’ll)

Meanwhile, the other side of the house (you know, the side that has a strategy) worked on cover stories to explain the way they’ll vote. Tyler said he isn’t going to lie and he’ll tell Bayleigh that he thinks Rachel was the vote to keep Kaitlyn trying to frame him. He’ll also remind her she told him she didn’t care who went home.  Angela will tell Bayleigh that they know Rachel tried to get them otb, made final 2’s with both of them and that Rachel told them about Bayleighs power. They’ve debated on telling her before or after the eviction. Angela has taken the position of ‘ask forgiveness, not permission’ from the beginning and that’s the plan for now but we’ll see.

Angel had a humurous moment with the camera too. Rachel was telling her goodnight and saying she was nervous. Angela told her it would all be over soon. Once Rachel left, Angela looked to the camera and mouthed ‘it will all be over.’ I like THIS Angela. She started out as an ottoman, I upgraded her to an office chair yesterday since it has wheels but if she keeps this up, she could become that one special piece of furniture that ties the whole room together. Angela also spent some time with Sam yesterday laying out how Rachel had done her wrong to reinforce the work Tyler’s already done with Sam.

Brett and Tyler think Bayleigh should be nominated next week to flush out her power app. JC thinks Brett needs to spend even more time with Scottie than he’s already doing so Scottie will be blamed for his vote. I’ve always said the hinky votes backfire but I’m eating my words with this cast. They really obsess over it and instead of accepting someone did it to create paranoia, they actually get paranoid.

Tyler finally talked to the camera last night but it was only to get a few digs at Kaitlyn, not insight into his game. He asked if we were bored with Kaitlyn gone and called us sicko’s but in a good-natured way.

JC hates not having Google to back up his arguments such as the percentage of the population that is left-handed.

Haleigh felt guilty for blaming Kaitlyn for stealing her sweatpants…she eventually found them.

Sam got a little upset at JC for calling her a lesbian and said he crossed boundaries. Tyler told her JC said he was gay about every day. JC told her he was only kidding. (Sam needs to lighten up imo) There was also a conversation between JC and Rachel when he asked if she was a real girl. She said yes and he asked if she “was trans,” she said no, he told her someone said she might be, she asked “who said it?” and he told her “I did.” She was pissed but it was a funny conversation because I’ve never seen anybody say that there’s a rumor going around and immediately after, say they’re the one who started the rumor.

I heard Bayleigh talking about Sam describing when Sam chose her power app.  According to Bayleigh, Sam said something about ‘choosing the one they wanted her to pick.’ I certainly don’t doubt it because we know that’s how production operates but at the same time, I have to consider that Bayleigh is the source of the information and we know she isn’t the most truthful person in the house so… who knows?

I may do an additional post later for a gossip update but that’s all I have for now, I have a doctor’s appointment before work. Have a great Tuesday!