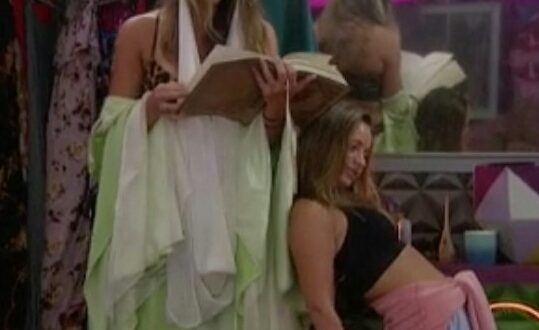 There were many quiet conversations happening last night and they may end up more important than the blow up from the day before. If Steve doesn’t have to change the image at the top because of size, it’s a pic of Kaitlyn making sure she stands in front of and by Hayleigh during a Hamlet reading. She has to know this will be aired and wants to get that camera time. Rachel is another one who doesn’t miss the opportunity. It seems appropriate because Kaitlyn is a mess even though she has nothing to do with what’s going on this week.

Sam confirmed to Tyler she had no intention of saving Brett or Winston so it’s a given that Brad or Chad will leave. (These are the names they gave themselves in case you’ve missed it) I’m telling you that first because they arn’t relevant in most of what was talked about last night. However, it will impact the people who stay. This season has been harder to cover since things happening now are still about what happened 2 weeks ago. I’m not complaining since they’re playing the game but in order to give you the reason things are happening, it makes the updates longer so bear with me.

Although those were the most important talks that happened, here’s some random stuff that’s  game related but some of it isn’t:

People are making comments online about Kaitlyn’s career being ruined by her actions on the show.  Let’s be real, Kaitlyn gives spray tans for a living and would like to be a life coach. That’s the reality of her career. This isn’t the first time CBS has taken liberties with someone’s job. The same thing goes for the intro packages. Many people turned against Winston during the first episode because of the “gun loving” intro. It could be true but just as easily, not true and it happens every year. Christine (bb16) was made out to be some kind of obsessed nudist but it was NEVER talked about during the season and there are plenty more examples. Haleigh was irritated with the “farm girl”  package and talked about it on the feeds. She’s from Texas so that’s what they ran with. Sam has money and relates easier to people who do (she sort of said this, I think but it was the night she didn’t make any sense while talking to Brett) so maybe she lives in a camper in her mom’s backyard…maybe she doesn’t.

NK: Got your msg from last night girl!