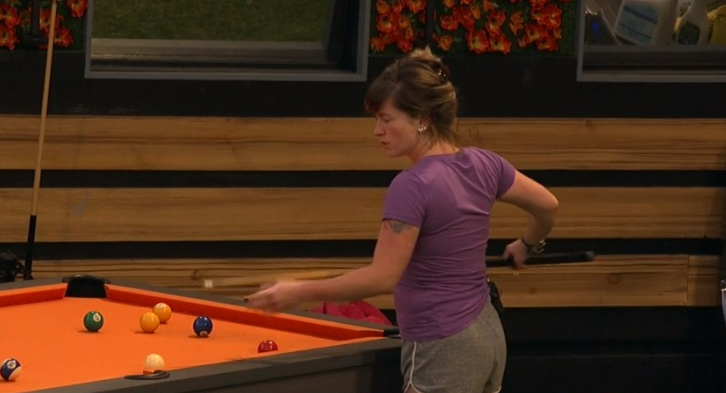 Luckily for Kaitlyn, there’s an even number of people voting this week so her hoh power hasn’t completely ended so she could be a tiebreaker. The power trip is still going and I recall Rockstar or someone wishing they had slop cookies yesterday. Angela must know how to make them because Rockstar said she knew Angela wouldn’t make them for her. Kaitlyn reassured Rockstar she would make Angela do it because she’s the HOH. She also came downstairs long enough to wonder who’d made her dinner and where it was. The fall from the penthouse is going to be a huge fall on Thursday.  CBS has to be thrilled with this train wreck! I’m expecting a massage/servant clip this week and will be a little disappointed if I don’t get it.

There was game talk last night but there was a relaxed mood in the house. Sorry drama wishers (myself), Swaggy went straight into game mode after the veto ceremony and stayed there the rest of the night. He did a very impressive job. I don’t know if he can pull it off but he’s putting in the work. He was showing off the potential many of us saw in him preseason before he came in and basically did everything wrong. There was a lot of game talk so let’s go over the conversations:

Swaggy eventually spoke with Kaitlyn and Tyler one on one even though his first plan was to always speak to them together. I understood why he wanted to do this but he was always going to get further with Kaitlyn if Tyler wasn’t around. Tyler knowing exactly what Swaggy was saying to Kaitlyn made it easier for Tyler to shut it down later. The biggest things in this talk was Swaggy swearing on his dad that he didn’t call Kaitlyn a liability, saying it was all miscommunication and shares he and Bayleigh are a couple which was a secret. Whenever Swaggy made a good point, Tyler just kind of stared and blinked. You could tell he was already planning what to say to Kaitlyn afterward. This was when Swaggy met with them together.

Swaggy/Tyler: Swaggy assures Tyler everything will be a fresh start if Tyler is the 6th vote and Kaitlyn breaks the tie. He asks Tyler to be honest and tell him if the reason he doesn’t want him to stay is because he doesn’t trust him. Of course, Tyler doesn’t do this and puts it mostly on Rockstar. (This was good info Kaitlyn gave up earlier and Tyler made note of it) Tyler says he knows Rockstar is blaming him and wants him out so it’s hard to trust Swaggy’s group won’t go after him. They both know it’s BS and Tyler ends it by saying he’ll see what Kaitlyn wants to do…what he’s thinking is “crap, I have to give more massages and keep staring into Kaitlyns eyes!”

Swaggy/Kaitlyn: Swaggy goes more with the Bayleigh strategy this time and how they can’t be torn apart this early. He says he knows she’ll be in jury all summer or she’ll win and those are the only options. He just met her and doesn’t want to be apart all summer. (There is one more option but he doesn’t mention it) Kaitlyn told him if it was a tie, she doesn’t think she could send him home.

Swaggy/Fessy: They discuss the progress and the best way to approach people. Swaggy wants to approach Sam from a personal level, keep using the Kaitlyn connection with Tyler and reassure JC he’ll be able to continue to stay in the middle if Swaggy stays because they know it’s what JC wants. Swaggy was upset that it’s a back door and he didn’t get a chance to save himself. (That’s what happens when you come in saying you’re going to win everything and crush everyone, just sayin’)

Swaggy/Bayleigh: She wants to have a talk to let Tyler know she loves him and always has. She wants to know if she’ll be ok going forward. Tyler assures her she is and they do the little pinky thing but it’s BS on both sides. (I always get annoyed when people don’t do anything to cultivate relationships, find themselves in trouble and run around making everyone promise that they’re okay with them)

Fessy/Tyler: This was one of the better talks because it was funny. They agree to work together but continue to have the house think they are against each other. Tyler pointed out Fessy was staring daggers at him earlier so it shouldn’t be hard to pull off. He admitted he did and said he was really pissed because Kaitlyn had just told him what she was going to do at the veto ceremony. They say that neither is threatened by the other and they both love Kaitlyn so it only makes sense to work together. Tyler gets in a comment about Fessy being her #1 to seem less threatening I’m sure. Tyler jokes they have to work together or Kaitlyn eill kill them. Fessy brings up how Kaitlyn will probably get the power app and that she’s the baddest female player in the history of BB or something like that. (Kaitlyn told Fessy she was, made him say it and now I guesse he’s convinced so let’s just say, I’m glad Fessy is pretty) Tyler agreed while laughing a little probably to cover up what he really thinks. (maybe Kaitlyn just needs to sage him again. It make take more herbs with Tyler since he’s better at BB than Fessy)

Hayleigh/Fessy/Rockstar: Hayleigh and Fessy hang out in the hot tub. Fessy is already back at work trying to recreate Caleb & Amber from BB16. He keeps asking and she keeps shutting it down. His poor brain is about to explode. I think his raging hormones mixed with Hayleighs flirting and rejection is more than this poor veggie ham eater can take! She is saved when Rockstar joins them. Hayleigh said she really wished she had some beer. Rockstar said she really wished she had some d**k. Well, ok then. Hayleigh also said she really doesn’t like Rachel and wants her out before Rachel. (Angela seems the bigger threat to me for the house as a whole but I can see why Rachel is more of a problem for Hayleigh specifically. Rachel came in playing the same type if game as Hayleigh with the flirting. Kaitlyn encouraged Fessy to talk with Rachel more and even tho it hasn’t been said, I wonder if JC is another reason. JC’s had a connection with Hayleigh for a while and they talk a lot of game privately. Rachel jokes around a lot and spends time with JC)

Swaggy /Sam: This was the talk of the night.  He tried to pull on her heart strings and told her how rough his life’s been. He talked about moving 17 times in 8 years and gave her the story behind his Swaggy C persona. He also said how important BB was to him and that for eight or nine people in the house, they were recruited. Sam very sincerely told him if the show was that important to him, he could just come back and do it again. Swaggy told her it wasn’t that easy so Sam suggested he get a job with CBS and work on the show when it’s over. (Not the way he wanted this to go) She also told him the reason he was intimidating when he first came into the house was he gave off the vibe that if you agreed to work with Swaggy, you were agreeing to lose to Swaggy.  (He did) She suggested he start over and actually try to get to know people. She had some basketball comparisons for him to relate it to the game. She also suggested that he open up the zipper on his chest and let his heart fall out. I believe there was something about turning on a faucet and letting shit run out too. (He was trying to get her vote and she was counseling him on life so I have no idea what the result will be)

Kaitlyn/Sam: They discussed liking each other, working together, etc. Sam said they didn’t know each other very well and Kaitlyn said they did because she could “read her.” Sam talked abut people being people and not commodities. She thinks both Swaggy and Winston suck at strategy and that it may be better for Kaitlyn to keep Swaggy in the house. (I’m curious to know what Tyler will think of this)

Kaitlyn/Tyler: We had to endure more arm writing in the dark. Kaitlyn likes to spell messages on a Tylers arm, in the hoh bed, in the dark. The night before she spelled something like ‘I want to kiss you so bad’ and ‘I’d throw it all away for you’ so there was more of it last night. Tyler wasn’t giving her what she wanted with the messages and she isn’t subtle. We’ll have to see if she’s pouting today or if the essential oils in his big hair can keep her under control.

Hope you guys have a great Tuesday!