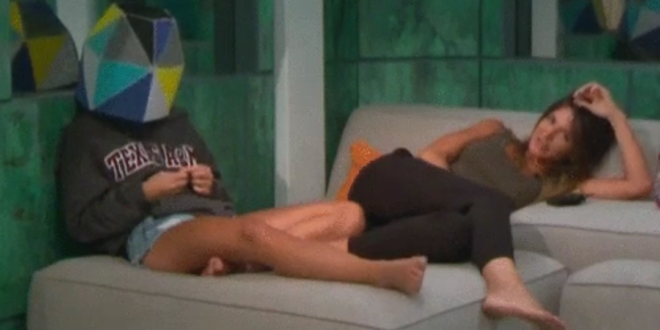 Good morning! I hope everyone had a nice weekend. The hg’s got to have a Labor Day party yesterday, do some grilling and relax.  I was only listening to the feeds while doing some other things. I heard Angela and Haleigh talking, looked up and Haleigh was wearing a trash can (?) on her head. The boredom in that house is real! Along with boredom, people are really starting to get on each other’s nerves. Several of them mentioned it yesterday. They’ve spent about 2 and a half months together and they’re sick of each other. I can’t imagine doing it because I have to have my alone time. The only thing I’d enjoy about the house is not having to be attached to my phone constantly. Being self-employed, if you miss a call, you miss a job so it’s permanently attached to me.

Random: This is Haleigh sleeping with her eyes half open. My son used to do this (maybe he still does, don’t know) and it used to give everyone the creeps. Maybe she’s just staying alert for a backstab even in sleep? 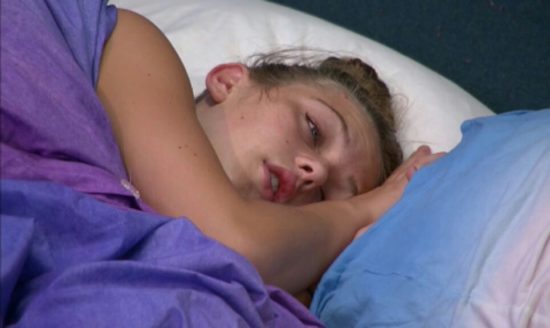 The activity in the house has slowed down and I’ve seen Foutte fans complaining that it’s because all the “fun” people have left. Actually, half the house has left so it always slows down. We’re also dealing with the aftermath of a battle back which traditionally puts the brakes on the game for a bit.

There’s been more plotting going on than I thought we’d have so it could be about to pick up again. JC & Brett are talking about making a move, Angela’s tired of JC and Haleigh could mix things up. (assuming she stays and doesn’t go after Sam)

I know JC is possessive over Tyler but he’s justified in questioning him about the situation. If you’re JC and you really have a F2 with Tyler, it doesn’t make sense not to split up Angela & KC next. Hay and Sam hate each other and arn’t going to work together. This should be a huge red flag for JC. Unfortunately, I’m not sure what he’s going to be able to do about it unless Hay wins the next hoh and he works on her. Brett sees what’s going on but he has L6 for now so he knows he has to be careful. If everyone want their shot to win, Tyler is the one they need to get rid of, not Angela but I don’t know if they can see it. It’s time to make a move but the path to do it isn’t clear. It should at least get very interesting. Have a great Tuesday!