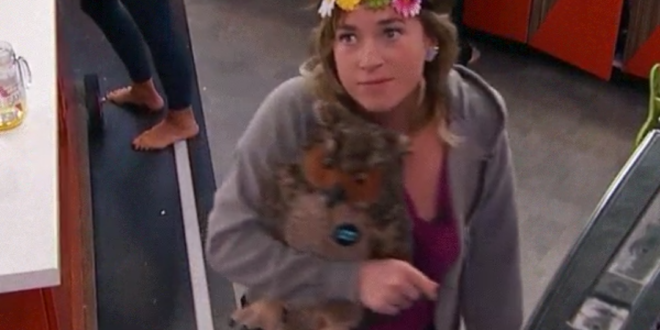 Good morning, yesterday was one of the slowest days we’ve seen in the house. We haven’t had many but even a great season can’t be exciting every day. It’s unusual to have the vote locked up this early.  Level 6 is used to getting their way but the work they put into accomplishing their goal isn’t usually done by Monday. That’s what happening now and I agree with Steve, we’re just waiting for Scotties eviction. Most of what I’m recapping isn’t game talk because there wasn’t much of it. Most of it’s the trivial things I try to cram in but usually can’t because these people game so much. I’m going to set the bar low for your expectations with this recap by showing you an example of what we watched yesterday. This was one of the camera views for a while. We watched the pool being cleaned: 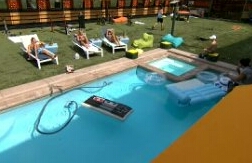 Before the veto ceremony, Scottie told Tyler he thought Sam may be going on the block so Scottie did think there was a chance he got through to Fessy and it sounds like he gave it one last try with his speech too. He tossed Sam under the bus and said something about how she’s playing everyone during his speech. I heard Haleigh say she could tell Sam thought Scottie was talking about Haleigh at first and then realized it was about her. My guess is that is wasn’t too bad because I didn’t hear them going on about it like it was a big deal.

After the veto ceremony, we learned Kaycee was the replacement nom and Brett didn’t wear the speedo he was going to borrow from JC. They  said  it was too small and he couldn’t get it up over his legs. (that’s probably a good thing for everyone involved, including us) Brett didn’t tell Fessy to suck his c**k as he’d planned either. Angela asked him why he didn’t and he said he wasn’t allowed and Angela seemed surprised. (Really? Did she flip over to Foutte and borrow one of their brains? Why would she think they’d let him say that?) They haven’t shown many of the veto speeches this year but they need usable footage in case they decide to air it. Here’s some other things that went on after the ceremony:

I’m going to pause for a minute because I know this has been discussed on this site and everywhere else so I’m going to address my own feelings regarding “talking” about Sam as I can only speak for myself. I don’t know if she needs medication, if she’s taking medication or if she’s just has a kooky personality and doesn’t need any at all. Recently, I said I thought she should leave the show because she was saying some very dark things. I said it after she’d said some things that I didn’t feel were entertainment, instead they were alarming and sad.  It was my opinion and I shared it. I don’t know what they’re doing for her now or what if anything, they’re giving her and it’s really none of my business.  I do know she’s still there and is choosing to be there. Therefore, if I see her do or say some crazy shit, I’m gonna talk about it. If she says alarming things again, I’ll go back to wishing they’d pull her from the show for her own well being. Until then, I’m going to talk about her like all the other crazy people we’ve had on BB. I mean, come on, we had Kaitlyn on the same season and she’s got to be nuts. What about Raven? Danielle from BB14 was crazy too. She was just like Raven, only she had WAY better makeup. I’m not going to hold the hg’s to a higher standard either. JC told Fessy the other night that he thought certain things about Sam because of some issues his dad deals with. (I’m not elaborating because his dad isn’t on the show) Angela, KC and Haleigh talked about her yesterday too. They’re all saying things like “how does she seem to be doing now?” Everyone in the house is talking about it and how can we blame them? She told Tyler he has rattlesnake sounds coming from him. She told Brett all that stuff right to his face about them being in love and getting married. They LIVE with her so of course they think she’s nuts! She hides in the closet with them in the same room! Hopefully, JC and the others keep their jokes to a minimum and behind her back, the way they do all the other trash talking they do.  If not, JC may get curb stomped and…he’ll have it coming.  I wish them all long, healthy and happy lives when this is over but for now, she’s one of many people we talk about in the house because she’s in the game even if she isn’t playing the game.

Later into the evening: