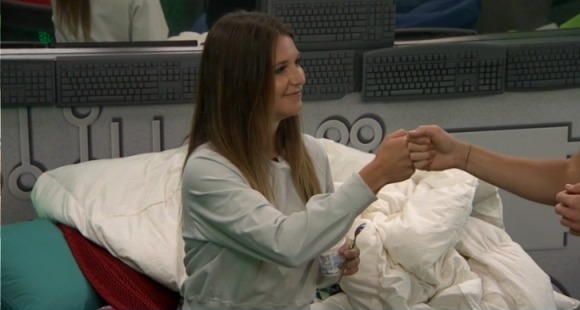 Good morning! I rushed through my work day yesterday (wasn’t easy on a Monday) so I could see the fall out from the veto ceremony and as Steve already discussed, there wasn’t any. Oh well, we’re getting spoiled because this season’s so great but I guess we can’t have everything.  Bay didn’t get why she was being blamed for something she didn’t do (hacker) and Scottie played dumb. Tyler snapped at Bay (we think) and Haleigh tried NOT to look like someone who’d possibly just caused her bff in the game to go home. It can’t be said enough that even people playing badly is great because they are still playing..well, we do have Sam.

If you read Steves posts from yesterday, you already know what went down after the ceremony and how we waited all day for Angela and Bay to talk. It never happened but it may today. Level 6 is patting themselves on the backs and Hive is trying to pick up the pieces and chooses between RS and Bay to be evicted. It isn’t really a choice for Hay and Fessy as they see Bay as the stronger player. She’s won an hoh, is a target and still has a power app they could use. I didn’t hear them voice these reasons but will assume that’s what they are. If they were choosing based on loyalty, hands down, RS would be the winner. (Bay won 1 comp anybody could’ve won and RS came VERY close to winning a couple of them so I’m not convinced Bay has an edge there) It won’t matter what Hay and Fes want as they are only 2 votes.

I’ll go over things by person today. I know I’m not consistent because sometimes I recap going player-by-player and sometimes I do it by individual conversations. The way things happened the night before usually dictates the way I do it to keep it straight in my head. I suppose I’m just one of those box of chocolates type of people. Sorry.

Sorry, maybe a little too much coffee this morning! Have a great Tuesday!