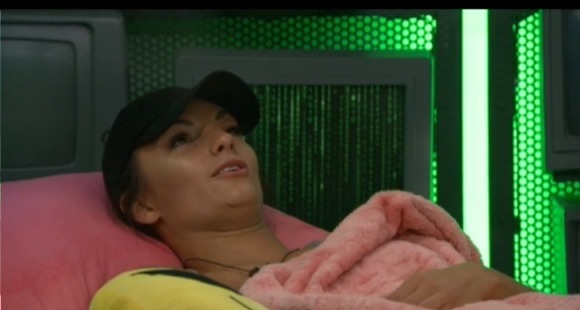 Good evening, everyone!  Today was a late nomination ceremony and it could have something to do with Bayleigh staying awake until 6 am and production being nice. Maybe. Who knows?

It was an interesting afternoon on the feeds as Bayleigh randomly decided to trust Rachel enough to tell her the power she has and that trust was confirmed by Rachel keeping the secret against her alliance!  Just kidding. No more than 10 minutes later, she was telling Angela about the power and they were trying to figure out a way to use it to their advantage. On Twitter, it was widely considered a pretty terrible move on Bayleigh’s part to reveal that to Rachel of all people, but what’s done is done. She threw away her element of surprise in exchange for what?  Putting Rachel on the block a few hours later?

I know that Rachel is the “pawn”, but let’s be real here, nobody likes to be a pawn and they don’t forget it. Even the people who volunteer know that the hoh is happily willing to risk their game if things go bad. Notice the hoh rarely put real friends on the block as pawns?  It can happen but what mostly happens is the hoh puts up someone the house “likes” (aka – the person nobody in the house is actually scared of). If you put a pawn up, you’d better be willing to accept that person may come after you sooner than later just because of that move. To tell someone your secret just before you make yourself a target is pretty foolish.

Here are some Friday night updates –