Big Brother 20-Put Some Clothes On Or Risk Eviction 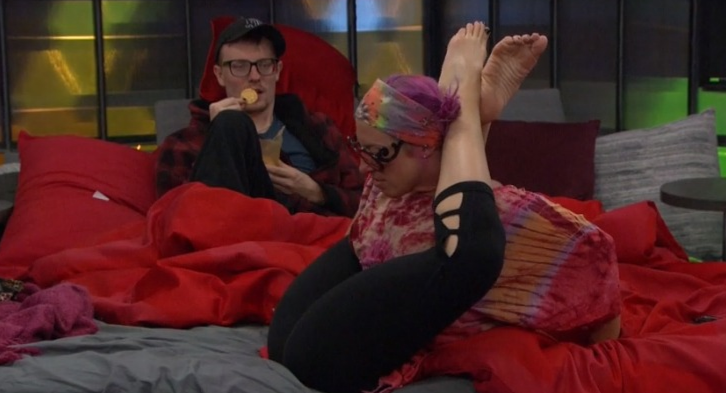 Since today has become the unofficial day for Women’s Empowerment, Steve is graciously letting me discuss BB for the 2nd time today.  My dread going into this week, knowing the power had to be used was thinking it would be boring and the entire week wouldn’t matter. So far, it’s been eventful. I’ll recap some of the chat today and give you my take on it.

As Steve’s already posted, Kaitlyn and Hayleigh are the noms this week. Kaitlyn had one of her 5 times daily pity parties, guilted Fessy over why she shouldn’t choose him to play in veto (she was fishing to get him to say he’d choose her over Hay) and asked Tyler to play for her if she gets hg’s choice. Kaitlyn said she wasn’t crying because she was otb (eyeroll) but was upset by Sam’s speech when shE said something about them not being good examples of women’s empowerment. Hayleigh joined her along with Tyler and Brett and they both said they didn’t disrespect men. They told the guys if they’ve ever disrespected them, they were sorry. (It was obvious they were missing Sam’s point.  We haven’t heard the speech yet but I have a feeling Sam was trying to say the ladies were disrespecting themselves, not the men)

Kaitlyn told Fessy and Bayleigh pretty much the same things. She also said she wouldn’t disrespect men as she had a brother, father and boyfriend. (Who’s humming “Two out of three ain’t bad” by Meatloaf right now?

Hayleigh is upset and says she’s done, doesn’t want to be there, the usual when people feel defeated. She mentions not being able to campaign like Kaitlyn so she knows she’ll go home. I don’t know why she can’t so maybe it’s a temporary pity party. I’ve liked Hayleigh and this week, we’ll get to see what she’s made of as a player.  I hope she doesn’t disappoint because even Winston and Brett kept their spirits up and worked to stay.

Sam met with Rachel and explained her reason for the noms. I enjoyed Sam’s hoh room reveal last night more than any in years and was taking a baby step towards liking her….. then this conversation happened:

Sam apparently doesn’t like that Kaitlyn and Hayleigh walk around “half naked” looking like they just rolled out of bed. She really doesn’t like them rolling all over the guys in the house. She says they don’t clean and are messy. They ask to borrow things from people and the “half dressed” clothing they do wear doesn’t fit them. She doesn’t like the flirting strategy at all ya’ll. She’s ok with Rachel and Angela being half naked and flirting because their clothes fit them and the stuff they do is funny. She’s worried about the damage all this physical contact will have on Fessy, Tyler and possibly permanent damage to Scottie since he hasn’t been kissed. These are her words, not mine.

RS is confused because Sam told her she didn’t like bullies and doesn’t get why she’s leaving the biggest bully in the house (Brett) off the block. RS does more name calling, says Bretts the kind of guy who would flash money in a club but treat the servers like shit. (Brett made a game move, RS is the one who gets so personal) Sam gives her a life pep talk and tells her if she wants Brett gone, she’ll have to walk the walk. (I think it’s a nice way of saying “He isn’t mean to me so if you want him gone, win and get rid of him yourself) Sam isn’t there to do RS’s dirty work. She tells RS to stop letting what Brett said get to her. She tells her that Brett respects her because she commands respect from him. RS whines and says she guesses she doesn’t “command respect.” Sam says that RS has never had a conversation with Brett the way she is having with Sam. I missed a bit of this but will assume she explained some of her nom reasoning to RS because I heard RS questioning her and pointing out that Tyler has a lot going on with the women. (flirting, I guess) Sam says “he’s a man. He can’t help it.” Sam says it’s ok to be proud of your body and sexual but not lay around on top of people who may or may not have experience in a relationship or a tender heart. WTF??

That’s the gist of what happened and I’m still not sure what to think. Hg’s can use whatever strategy they want so if she wants to base it on personal reasons, I suppose it’s her right to do it but I sure as hell don’t have to respect it. Sam’s said she won’t tolerate personal shots at people but told Rachel the reasons for her noms were personal.

Don’t get me wrong, I think Kaitlyn is making a fool out of herself and I don’t have a problem with her being on the block. (She’s annoying but she is great for feeds and we may actually miss the drama when she’s gone but …maybe not) I shouldn’t be surprised because Sam’s said she isn’t playing the game and everything she does is personally motivated but this is a let down to me. Don’t give a speech about women’s empowerment and then slut shame your 2 nominees in a speech that will be shown on television. (I mean, you couldn’t write this stuff) When it come to BB, I don’t care if they play with women’s power, men’s power or even battery power but play the damn game!

Sam got mad the other night at Kaitlyn and Hayleigh when she thought they were neglecting her and then making fun of her. That’s where part of this comes from. She plays personal and that’s her most recent personal problem with anyone. It’s also why I expected Kaitlyn and Hayleigh to be nominated. Tyler and Scottie are Sam’s 2 closest people. (Scottie may be going after her and Tyler but she doesn’t know it yet) I’m hoping this is really a game move and she sees these women getting too close to her main guys and wants to rid herself of them so they don’t mess up her final 3 plans. I’m afraid it isn’t true but I’m trying to be optimistic regarding Sam and she’s making it really damn hard!

Have a great night!