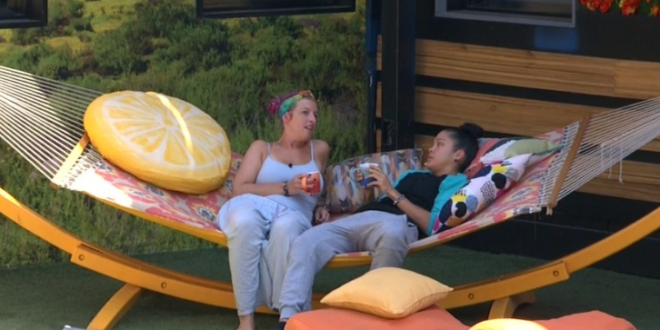 This week has been turning into an interesting week on a tactical level. While everyone knows the person leaving on Thursday night has a chance to return to the game, neither Rockstar nor Kaitlyn are just sitting around waiting for said chance. Unlike other seasons (like Lawon!), they know there is always a super real possibility they remain out of those doors once they leave and they just don’t want to risk it.

Kaitlyn has been doing her best to prove Sam’s reason for nominating her correct, and that was that Kaitlyn is using her sexuality to her advantage. Since Friday, Kaitlyn has been rubbing up against almost every guy in the house (like a dog in heat) except for I think Scottie. People are going to say – Well, what about JC? She had that covered! Yesterday she hopped into bed between Tyler and JC and snuggled up next to him before he had enough of that and left the bed. I think Scottie really is the only guy remaining in the house that she hasn’t flirted with this week – unless I missed her doing that.

Meanwhile, Rockstar has been taking the pity approach with everyone. Her goal is to guilt people into keeping her by mentioning how much she is struggling financially and how she’s a big fan of the show. She wants to at least make jury which guarantees her at least another $5-6k (they get paid around $1k/week for being on the show). I mean it’s an understandable goal to reach, but nobody really cares because they’re not going to make decisions against their own interests just to give someone a few thousand dollars. Swaggy C already tried that approach and the house didn’t do anything about it.

With that said, I am glad to see both people at least trying. Whether I agree with how they’re campaigning or not, that is a serious step up from recent seasons when the nominated houseguests would just spend the week in bed waiting for Thursday night (Swaggy did this as well after his pity party attempts quickly failed). This season continues to surprise me with how these people are all actually trying, but if you compare it to last season’s disaster, anything looks better.