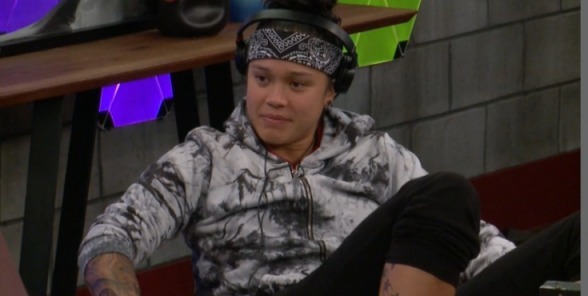 It’s Saturday in the Big Brother house and it’s a huge day for Haleigh. She needs to win the PoV competition or she’s out of the game. There aren’t many situations that would keep her in the house another round and the same goes for next eviction. Notice I didn’t say ‘week’, that’s because this week is a double eviction so it’s more than likely that Haleigh will be leaving on Thursday night even if she wins today, but she’ll at least survive an eviction.

And there is always the remote chance that Haleigh wins today then wins veto on Thursday night, but she’s not exactly a comp beast. She’s good, but not great. The only way she cracks the top 4 is if she wins today, wins veto on Thursday, then wins the HoH (or veto) the following week. She basically needs to win her way into the finals because there is zero chance she makes it otherwise. If there was any possibility of her being carried into the finals, Scottie came back and sealed that shut with a welding torch when he told the house how bitter the jury was (although they probably expected it).

Scottie thought that was a good game move because he could use that to his advantage and sit next to someone in the final 2 but it was insanely stupid. His pitch was basically “you need to keep me in the game because I’m the 5th vote who will prevent you from winning”. The problem is, he didn’t factor in that the jury members have to vote regardless and anyone remaining in the house would rather take their chances with a bitter hive jury deciding over two ‘level 6’ members or knowing they already have 4 votes against them and it will just take 1 more to lose if Scottie (or Haleigh) was next to them.

Put it this way, if you were, say, Angela, would you rather sit next to Scottie knowing you have 4 votes against you before you even speak, or would you rather sit next to a Tyler and know the jury hates him almost as much so she may be able to win even 1-2 votes from that side. A completely stupid decision by Scottie capping out a season full of stupid decisions by that side of the house.

Today is going to be another day with very few updates until later on. The veto hasn’t even begun yet and there is a good chance we could finally see the comic book competition which is always a popular one. In fact, this is one of the last chances to have that comp. The next veto comp will air on TV and it will be a quick one that can be finished in minutes, and the one after that will only have 5 people competing. That said, BB18 and BB19 were done with only 5 people so it’s very possible BB comics will next Saturday.

If it’s not the comic book comp, I’m guessing it will be a different individual comp sponsored by something that will give the winner a reward (outback, movie, etc)