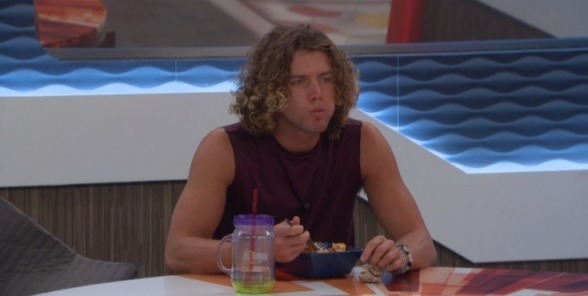 It’s the second to last Saturday inside the Big Brother house (!!!) and we’ve reached the point where I’m sitting there watching Tyler eat a bowl of cereal because it’s either that or watch Sam in the bathroom doing stuff to her face.

A random thought came to me yesterday when I was browsing my Twitter feed and saw Swaggy interviewing Baleigh’s mother for his ‘Swaleigh’ Youtube channel. That thought is – holy shit, what is Bayleigh going to go home to??

Look, everyone knows I’m not a fan of the way BB pushes showmances on us every single season. However, I do accept that they happen because they’re bound to happen when you throw a bunch of single people in a house together for 3 months. Even showmances you never thought possible end up happening the longer they stay alone.. Austin and Liz, Natalie and James, Sam and a camera. Stuff like that happens, it’s life.

The part that is crazy is when you meet someone in the house and only hang out with them for 3 weeks and they leave the BB to go to your house and basically move in with your family! Think about this for a second.. Bayleigh only knew Swaggy for 3 weeks. It will be more than 2 months since she last saw him by the time they finally reunite which is roughly 3x the length of their relationship. She’s going to go home to not only find out that he still loves her (which was expected and mostly normal), but that he’s basically moved into her parent’s house and does Youtube videos with your mom on a channel you are going to be forced to be part of.

She’s all sitting around jury house having the most relaxing summer ever thinking about things like how they’re going to handle a long distanced relationship and how soon after the show will she get to spend serious time with him and little does she know that he’s hanging around your house the past 2 months!

Disclaimer – I don’t know for certain that he’s been living there the entire time but math tells us he has been. Unless he was lying about his finances, Swaggy needed to make it through jury to be able to afford to make his move to the west coast. That means he isn’t rolling in it so the chances of him hopping on a plane to visit her family multiple times is slim but even slimmer would have been him paying for a hotel or something for the last 2 months near her parents. The only other option is that Bayleigh’s parents have footing the bill for him to keep traveling out.

Update – Another amazing person donated today and told me to split the donation with Mel and NK and I feel like such an idiot for not even thinking of NK earlier. Rather than split it with them, I’m splitting it between them today and until the rest of the season (NK, return my email so I can get your PP info). Any donations you make will be split 50/50 between Mel and NK as the website is paid for at least until Celeb BB. I want to thank those two ladies and everyone else for another amazing season on this site.  Oh, and for everything donated, I’m going to match up to $100 to split between them as well!  So, get your donations in here because I want to match that full amount!  And again, NK, email me!