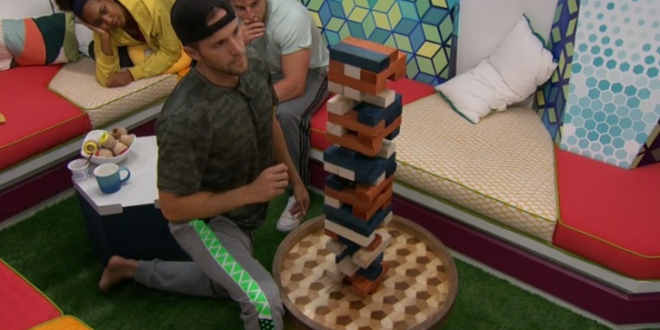 I said I was going to have an update this morning, but a strange thing happened last night around 2:30 am. My power went out. No big deal, right? Well, still out this morning so I knew something was wrong. I took a ride and saw a pole down on my street and the electric company working on more down wires around the corner.  Turns out someone slammed into a pole last night and took everything out on our street. Unreal.

That was my day. Had I known that I wouldn’t have internet until nearly 6, I would have worked this afternoon rather than watch my bank account slowly empty.  Alright, enough of my problems, time to check in on the feeds…

The biggest news of the night is that most of my original ‘cool kids‘ finally made it official with their alliance called the ‘Level 6’.  This alliance consists of:

Brett, Winston, Tyler, Angela, Rachel, and Kaycee with JC as the 7th wheel

Four of those people were on my list to align and Tyler was on my list to be a wildcard going in either direction. The biggest surprise so far is that Hay and Bay are not part of that alliance and that Kaycee is. I really thought that Faysal was going to swing with the cool kids as well but I guess stuff happened during the first week to pull him away from that group (no rumors, just my theory).

Daily reminder – Sign up for the feeds right here! You get a free week. Boom.

Alright, I’m tired. You’ll have to keep up in the comments with the overnight.  Hopefully nobody hits a pole tonight and I can have internet longer tomorrow.