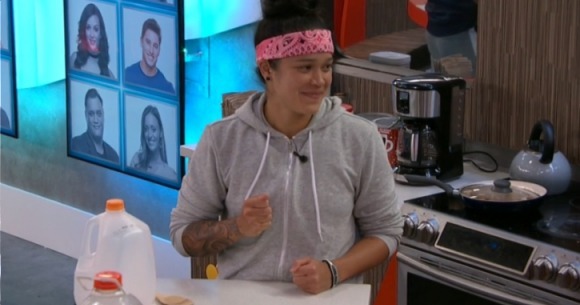 I hope I wasn’t missed today! With the veto comp set to be a fairly long one (2-3 hours), I decided to step away for a few hours this afternoon considering I knew the house was just going to be sitting around waiting for the comp to begin.  I didn’t realize the comp would start this late (4:30 pm) which means feeds won’t be back until possibly BBAD.

Before I begin, I want to give a huge thank you to everyone who has donated so far this season. It means a lot and I really appreciate it!

Back to the game – it’s a huge night for level 6 as Kaycee’s hard work of winning the PoV could be for nothing if half of the people playing end up winning the PoV. For the second week in a row, the person removed from the block was picked to play and not by the hacker which means Kaycee will join Angela, RS, and Haleigh in addition to Tyler (hacker pick) and Fessy (picked by RS).  Seeing as the veto competition is OTEV which is around 75% luck and 25% skill, anyone playing can win – even Rockstar.  Sure, if it came down to a foot race, RS has no chance, but if she gets lucky every round and finds the right answer to the question, she can win.  Less athletic people have won this competition in the past.

Personally, I wouldn’t put my money on it. I think odds are great that we’ll see Tyler or Haleigh with the veto when the feeds return, but I’m just saying don’t count anyone out quite yet.

The scenarios are pretty simple, however:

Let’s get to the updates:

Interesting day today.  The week is not over for L6 yet but they did everything they were supposed to this weekend. The biggest challenge now is getting Sam or JC to vote out RS.  By wiping out Fessy’s vote, the vote is either going to be 5-1, 4-2 RS gone or 3-3 tie with Haleigh breaking and KC going.