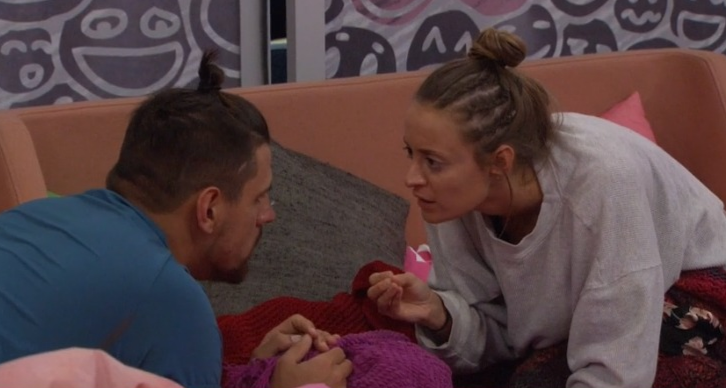 Good morning everyone on this Monday eve! I got in a little trouble for getting “two out of three ain’t bad” stuck in your heads so I tried to give you a new one last night. Lets have the lyrics  “torn between two lovers, feeling like a fool” stuck there until somebody does something to give us a new song. I’ll go through the day and (as usual) overlap some of what Steve told you yesterday.

After the veto comp, Fessy spoke with the ladies. He was also getting some pressure from JC saying not to use it, assuring him Hay will be safe. Fessy listens to JC a lot and JC’s been trying to steal Fessy away from Kait for a while. Tyler is encouraging Fessy to use the veto (quietly) and I’m enjoying watching Tyler and JC be on opposite sides of a game move for once. They work well together but JC doesn’t know about the power so he and Tyler aren’t together on this one. I don’t think Tyler wants to vote out anyone he’s good with knowing they’ll be back. RS is after him anyway so it doesn’t hurt him to vote her out. (I know it’s only a chance but this is CBS. If Kaitlyn is evicted, her puzzle will probably be 3 pieces…they aren’t letting that crazy chick out the door, she’s too good for the show.)

Surprisingly, Kaitlyn hung out with JC, Kaycee and Rachel playing Jenga for a while and made jokes about being otb. JC told twisted fairytale stories that were pretty funny. He started one about little red riding hood needing saved but the wolf was going to save his other friend instead…She stopped him and asked for a different story. (JC really is sick of her) He was also helping Kait take out her knotted up braids. He didn’t hesitate asking for scissors when he couldn’t get it loose. Rachel took over before JC could chop Kaits hair off. JC started a story and named a character Fredericka. We know it’s all got to be about Kaitlyn so she asked if they knew about the girl named Fredericka in her 10th grade Spanish class. (Sure Kaitlyn, that shit just comes up when people are getting acquainted!)

Some random thoughts on Sam and Swaggy before I wrap this up:

We may have finally figured out the reason Sam plays the game the way she does. It’s been so frustrating to watch her refuse to talk game or let anyone else do it around her. During her pep talk to Bayleigh, she kept telling Bay to channel her frustrations and save it for when it’s “time to play the game.” She said it didn’t belong in the house and should be used during the comps when they were “playing the game.” She made it sound like anytime other than during comps was their free time to regroup and take a break from the game. She gets irritated when “the game is over” and people want to keep bringing it into their life in the house the rest of the time. This isn’t word for word but I really think this is how she sees the game of BB. If so, it explains a lot. She’s really misinformed if this is what she thinks but she does seem a little less kooky to me now.

Don’t get me wrong, I think Sam has endearing and often quality advice for people even if it’s condescending. However, I wish she could make her point, give an example and move on. She beats a dead horse (and probably stuffs it too. Sorry, not ready to let go of taxidermy jokes yet) and goes on and on and on to make one point about something. (Similar to the way I write sometimes, huh?) I think Sam has a beautiful old soul, as my grandmother would have said. Having said that, she isn’t as nice as many people think. She’s curt, rude and bitchy to people quite often and has been since the beginning. People were worried about getting on her bad side long before she was hoh. I also think she has a very low tolerance for stupid. She doesn’t understand people who can’t realize if you don’t was towels, you’ll run out of clean ones. If BB didn’t control the lights, she’d complain about people leaving lights on in empty rooms. She complained last night about people leaving curling irons in the sink and plugged in, saying it’s a good way to get electrocuted. She’s right and I’d probably really enjoy her as a friend but her game is just plain nuts! Am I the only one who thinks she talks like she’s sucking on a cough drop or has chew in her mouth?

I’ve mentioned Swaggy is all over social media. He has some funny things to say but I think this is a missed opportunity for him. He’s still so bitter that he’s often very negative. More fans would love to chat with him if he could keep it light, accept the loss and enjoy it along with us. He reminds me of Hamza from BBCAN 6. People loved Hamzas full throttle style of play even if it was bad for his long game but he turned people off after his eviction because he was so bitter and couldn’t let it go. I think Swaggy could get the following he wanted when he went into the house if he’d play it a bit differently.

Steve Arienta tweeted a video of himself barbecuing and said that was his new summer plan since being evicted.