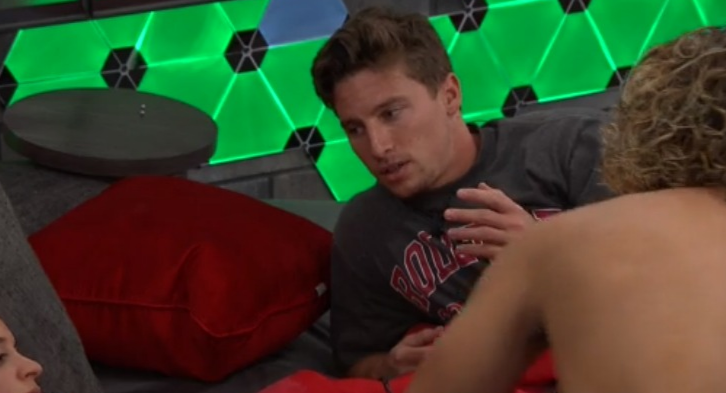 Is this the last week with Swaggy C? Kaitlyn is so messy that I still don’t know what will happen at the veto ceremony. The plan is for Tyler to use the veto on Scottie and Kaitlyn to put Swaggy up but she’s nervous about it. Shortly after the veto comp, (sounds like Jess and Cody hosted it with maybe pics of other past hg’s included) she was already looking for reasons to back out. She said she could tell Jess and Cody didn’t like her and maybe that meant America didn’t like her or the plan. She said she knew her friends would turn on her after this. She’s planning on telling Hayleigh, Rockstar and Fessy minutes before the ceremony. Tyler keeps giving her pep talks and she gets fired up again to do it. She’s asked everyone to tell her anything Swaggy says about her to use for ammunition and said she needs Tyler to keep reminding her of the things he’s already said. She even asked Winston to tell her things and he had to remind her  Swaggy doesn’t speak to him so he doesn’t know anything. This isn’t going to work because the people who Swaggy talk to don’t know about the BD plan.

Tyler has told Winston his reason for using the veto on Scottie is because he’s close with Swaggy and after Swaggy leaves, Scottie may be loyal to them if Tyler saves him. (Tyler confirmed to Scottie last night he was using it on him)  I don’t know if Tyler really believes this or if it’s just an excuse he’s using for Level 6. Everyone thinks its a great plan…except Winston. Either way, Winston was nervous but agreed it was a good plan. As the night went along, Winston changed his mind. He’s in complete meltdown, buggy eyes and all. He’s told his alliance that if he gets the sense he’s going home, there will be no alliance left because he’s blowing everything up. He’s under the impression that Level 6 is a secret. I hate to break it to him but if he goes home, there will be an alliance, he just won’t be in it anymore. Unrelated, after the veto comp, Scottie said the comp showed him that he couldn’t remember things while running back and forth and I thought it was funny. I also read where he said that if someone wanted to point a knife at somebody, he was their guy. I don’t know the context of this but wish I did because it was also funny. If anyone knows when this was said, please fill me in.

Winston had a lengthy talk with Kaitlyn in the storage room where he began to push the issue a little bit. Kaitlyn told him it was because she promised Scottie he would be safe and Winston reminded her she promised him the same. She told him he was safe and wasn’t going home. (She doesn’t have Tylers convincing skills so that’s really all she had) He also couldn’t understand why they had to keep it a secret when the secret would be out soon after when she puts Swaggy on the block. (He has a point) His argument to her was that Swaggy could have the app power this week. Just like last week, the Bros should let Tyler do the talking for them. Winston doesn’t get the more he puts that in her head, the more nervous she will be to put Swaggy up. She ends up telling him what happened to break up her group and how she was accused of being jealous. She, of course, embellished the story and Winston faked his outrage and empathy for her. It was a great conversation because of Winston’s facial expressions. (I need to get some screenshots of them. I mostly use pics Steve already has. He often has to resize them when I do it which is more work so it’s just easier to use his. That’s why you don’t get original pics from me very often) Winston must do some kind of facial strengthening workouts to even be able to sustain all the pulling and stretching he does with his face. I keep waiting for an eyeball to just pop out and roll across the floor. Kaitlyn also told Winston about the time Swaggy accidentally told her he had a deal with Winston and Brett. (For the people who think Swaggy’s playing an amazing game, remember that moment)

Kaitlyn continued to demand massages from the boys. Brett and Tyler seemed to alternate and later in the night Tyler, Brett and Kaitlyn made some kind of alliance. Kaitlyn asked if it was a F3 and Brett told her it could be. I’m curious if Brett passes this information on to Winston or keeps it to himself. That isn’t going to happen this week regardless because Brett is putting in work already just trying to keep Winston calm while being on massage duty. Bro is busy!! Winston does believe and says this will be the biggest blindside in BB history. That always amuses me when they think they are making history. He could be the first houseguest to chase his eyeballs across the kitchen floor but that’s the only history I see him making.

Tyler tells Kaitlyn about how he found out his dad wasn’t his biological dad, when Tyler was a teenager, just before his dad died. They were having personal bonding talk and about their friendship. This is Tylers strength in the game, the personal bonds. (It may not be enough to save him at this point tho) Last week, he came up with something completely illogical, told Kaitlyn to trust him, gave her no reasons when she asked for them and she did it anyway.

Hayleigh and Rockstar do a lot of game talking as usual, sometimes alone, some with Fessy and some with Bayleigh.  I’ll just say, I’m crazy about this duo in the house They are both very funny and smart regarding the game. I don’t know how far they’ll go but I’m really loving them as a pair.  They both caught on to Tyler last week but by now, they even have the specifics of his game figured out. (Still a little too late tho) Rockstar nailed it when she pointed out that she isn’t buying his goofy, dumb, surfer boy thing. She knows he’s gone back and forth and knows he’s the reason Kaitlyn switched sides. Rockstar is also very vocal regarding Kaitlyns need for male attention. They think if Tyler went first, they could reel Kaitlyn back in. (I mostly agree but think perhaps everyone with a penis may have to go for it to truly be successful) Hayleigh said she lies sometimes on purpose to see if her aura was telling Kaitlyn anything. They also remember Kaitlyn saying that Tyler told her anything bad they said about her. Bayleigh said Kaitlyn didn’t hang out with her anymore (that’s also Bayleighs fault too) and Rockstar and Hayleigh said the only reason Kaitlyn hung out with them was because they weren’t giving her a choice. They were following her around and forcing themselves on Kaitlyn. (I’ve mentioned before that Hayleigh and Tylers games weren’t all that different)

Swaggy and Bayleigh stuck with the plan of being antisocial for the most part.  They’ve kept themselves closed off from almost everyone for days. Bayleigh makes attempts to socialize with others but not nearly enough. They’ve spent most of their time feeding each others egos, calling the voters and hg’s stupid. Swaggy did apologize to America eventually so if that matters to you, there ya go. (I don’t care if he apologized but I also don’t care that he was mad at us either. Well, not us because I don’t like twists so I rebel by not voting. Granted, it’s a mini rebellion that accomplishes nothing.  If I was trying to win 500k and thought a bunch of people I’d never meet were voting and possibly screwing up my chances, I’d be pissed too) Swaggy may be playing bad but he is playing hard and no one wants to leave because of a twist. Bayleigh said they had been playing for us and had been America’s couple but they would just start playing for themselves now if we were going to do them that way. I mean???? It made about as much sense as Kaitlyn saying Swaggy broke his word first by getting into an alliance with Kaitlyn in the first place. Again, these people are delusional and fantastic!! Swaggy hopes people will target Tyler and Kaitlyn now since Tyler has won 2 comps and I think Swaggy will get what he wants with that one.

Sam did laundry last night and is still using the nice girl strategy. She thinks if she washes the towels and cleans the house, people will want to keep her. She also cleans because that’s her thing and she mentioned it gave her something she could control. I completely get that and am wired in a very similar way. Some of my most stressful days equal waking up to a spotless house. Unlike Sam, I’m not on BB and this won’t work long term. This will only make her a doormat but she got a late start, this is a role she feels comfortable in so I think she’s using it until her connections with people are stronger. (I still say she could have done more when she was a robot and didn’t have to be this far behind) Telling everyone what a good person she is will get old too if it hasn’t already. They may just start thinking she’s too good and pure for the dirty game of BB, do her a favor and kick her ass out. She had a good talk with Brett last night about personal life so there’s that. Brett, by the way, has REALLY stepped up his social game. He even hung out with Swaggy a little last night. (I still think he’s a douchebag but he may be a dougebag with some BB game)

JC continues to argue with production when they tell him to stop doing things. (Not the groping people stuff from earlier, this is normal stuff they ask him to stop doing) It’s funny but I see it getting old just like I’m already over people obstructing microphones. I don’t know how many people on here follow BB Canada but how I wish US would take a page from their book. They’ve brought houseguests into the living room (more than once) and given punishments for the entire house because of disrespecting and breaking the rules. They’ve gotten food taken away, made everyone a have not, etc. for things like ignoring wake up calls, talking about things they shouldn’t and ignoring other requests. Once, I think they took everything electric away so they had no oven, toaster, blowdryer, curling irons, hot tub, etc.

Check back later today to see the aftermath of what will have to be a messy day!