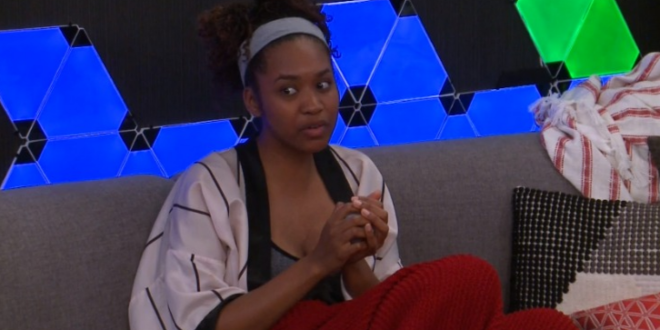 Good afternoon, everyone! It’s Wednesday in the Big Brother house and with a new week brings a new controversy.

This time once again involves JC and it is making waves all over the internet today. Last night around 12:38 am, JC and Bayleigh were having a talk (you can watch it here using the flashback feature) that got a bit edgy. note – I don’t even know what I can or can’t say, so in addition to saying N* (which we know what that refers to), I’ll also use M* (which refers to a derogatory word for a little person).

Bayleigh asked JC what the difference between dwarf and m* and he decided to reply with some examples. He said that it’s the same thing except one is an insult like saying “gay and f*” or “black and n*” (He obviously used the full words).

There were a hundred different ways that JC could have answered that, but he obviously chose one of the worst. I know this is stirring up a debate which I’m not having here. Why can Swaggy say it but JC can’t? Why can Bayleigh say m*? Blah blah. I can write an essay on topics like that, but I’ll spare people from it as everyone has their own opinion and I hope people will show each other the same respect for that in the comment section.  The bottom line, however, is what will CBS do with JC? This comes just like two weeks after Rachel/Angela stirred shit up by using racial slang words, and about a week after Papa John was forced to resign for something he said in a conference call.

I bring up the pizza dude because that is a very similar situation as JC. Neither person was being malicious with their tone or their intent, but that John guy resigned because it was a stupid thing to say. How will CBS handle this after their recent bad PR over Angela/Rachel (as well as JC himself for being too sexually aggressive)? This is an extremely tough situation to deal with because of the can of worms it opens, but it sounds like they’re going to be forced to do or say something about it. Needless to say, I’d hate to be Allison Grodner today (the producer of Big Brother).

We’ll keep everyone updated if anything happens to JC or from CBS.