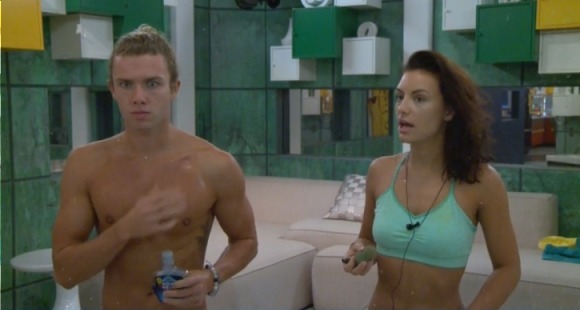 Good afternoon, everyone! Today is veto day in the house and Tyler has a very big decision to make. I still can’t believe Tyler won the veto but if he really was convinced he was a backdoor option, I guess it makes sense.

Now he has a very tough decision on his hands. Does he save Brett and risk something worse happening (like Angela going on the block) or keep noms the same and accept the loss of an alliance member this week? I know he doesn’t want to lose Brett, but he also doesn’t want to put a massive target on his back for no reason considering he may have the votes to keep Brett. Yes, he’ll lose Rachel in the process, but she has proven that she doesn’t have the mental strength to be a reliable ally for him  (note – I’m not taking sides or bashing anyone. Just thinking tactically from Tyler’s perspective today).

It is becoming quite clear that Tyler, Angela, and Kaycee are the backbone behind their alliance with Brett as the shield. Rachel really delivers nothing except for second place comp wins and a lot of paranoia to her group. She tried to blow up her own alliance because she decided to believe Bayleigh over someone she has been working with all game regarding the replacement nom (Bayleigh told Rachel that Tyler wanted Angela up and she believed her). That move alone would make her a liability in my book and without a doubt a target over Brett. The question now is, can Tyler squeeze the votes to save Brett?  With 9 votes this week, he needs 5 which is an uphill battle for him.

He needs to convince two out of this group to vote Rachel out:  Sam, Fessy, Scottie, JC, Haleigh

In theory, JC and Sam should be locks, but with JC doing his weird vote last week, and with all the crazy votes all season, he almost needs 6 total votes to keep Brett. Scottie and Haleigh were discussing who to keep last night, which shows they’re at least open to the possibility of keeping Brett while Fessy is becoming quite aware of the gender gap widening by the week. I’ve seen worse players overcome greater odds so I fully expect Rachel to leave this week, but you never know in this game.