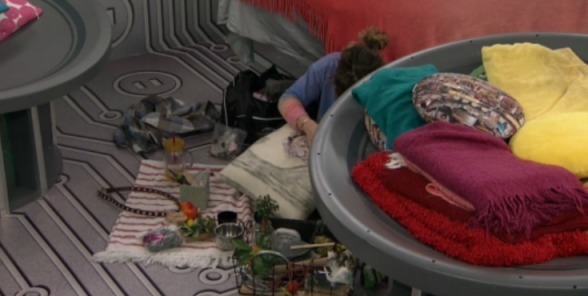 Scheduling note this week – The feeds will likely be down from sometime mid-Tuesday until after the west coast episode airs on Wednesday night. It’s the yearly 24+ hours of downtime they do for the Wednesday eviction episode.  If you’re new, they do this because they eviction episode is actually recorded on Tuesday but they don’t air it until Wednesday. To prevent spoilers, they keep the feeds down until the final episode airs on Wednesday night.

I’m really just filling blog space at this point because there is nothing going on in the house as they’re all just hanging around. As you can see from the image above, Sam has her arts & crafts stuff all over the HN room which should keep her busy until she’s given the boot. People are wondering why she’s going to be evicted first but I’d say it’s because Sam is a comp beast…. hold your laughter! I mean next to JC that is! Sam may have only won one competition, but she has displayed fire inside her that shows she’s the type who can will herself a win when she needs it most. JC has only come close in one competition all season long.

The reality is, it’s essentially a coin flip because I’ll be shocked to shit if the final 3 is anyone but Tyler, Kaycee, and Angela at this point.

Another time filler is thanking everyone for coming out in support of Mel and NK. If you missed yesterday’s announcement, I am splitting any donations the rest of the season 50/50 between Mel who has done a phenomenal job with her morning recaps and NK moderates and does an amazing job putting even more updates in the comment section.  If you’re interested in donating to these ladies, here is the link!

Oh, and Bebe Rexha is on the CBS episode tonight, so there’s that I guess?