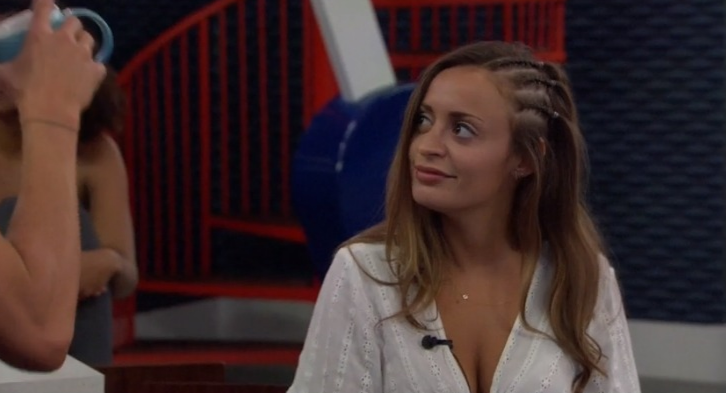 I hope everyone had a great weekend. I had both my granddaughters (6 and 1) this weekend and have been running my business VERY shorthanded lately so I wasn’t able to do the overnight updating. I’m so glad NK is back (you had us worried) and hope Steve’s toe isn’t broken.   (It isn’t, thank you!)

Steve covered the mess known as Kaitlyn, all the game talk and Hayleighs crap app in yesterday’s update and NK covered so much of last nights activity in the comments, I don’t have much to go over. (Thankfully since I’m not at my best on Mondays)

Apps: Anyone who reads anything I write, knows I’m not a fan of ANY twist. I have to say, they haven’t been too bad, especially considering how game-changing they usually are. At least, I was feeling that way until Bayleighs was revealed) Not only can she change noms, (which is huge) she gets to remain anonymous. I suppose we can pat ourselves on the back for guessing she was going to get it but I’m not thrilled with what she got. The silver lining was finding out it’s the last one. I thought they may do all five. (Alison Grodner said she wouldn’t tell what the remaining two were in case they wanted to use them at a later time) It would be kind of great if some of them were used during the same week since they have the potential to cancel each other out. I don’t like when a twist completely changes the game without a hg having to work for it (Pauls safety last year) but I am entertained by the paranoia the apps are creating. It’s making people think twice about who should go otb and a lot time is spent trying to figure out who has them. (Kaitlyn’s forgotten she was “sure” the 2nd one went to someone with a name starting with an “S.” The universe was giving her the info but she’s moved onto other people having it by now) Props to CBS for getting this twist “partially” right. Sometimes I sound like one of my grandparents: “Back in my day, it wasn’t done this way” and “kids today don’t know how it used to be and how good they’ve got it.” Just because I feel this way doesn’t mean I don’t have self-awareness over how I sound because I do. (Ya Kaitlyn, I’m looking at you)

Anyway, I’m just saying they aren’t that bad and the apps haven’t done anything to make me unhappy with the season so far. (I’m still shocked Winston came in 2nd to Bayleigh, according to Vegas) Unlike Bayleigh, Hayleigh getting the crap app was a surprise to me and I didn’t see that one coming. The crap apps haven’t been game-changing. It could cause people to keep the crap app winners around a bit longer as they may not be seen as gamers who are doing a lot. I’ll be curious to see if anyone thinks this way and when Fessy, Haleigh and Rachel are in trouble, will they think to use it as a selling point to stay in the house? (Fessy won’t, for sure) I’m also surprised no one has used the message/writing wall thing to write anonymous messages. So far it’s mostly Instagrams, Fessys real life app and places for fans to follow. Why isn’t someone writing “Angela has final 2 with whoever,” and “Rockstar was the flip vote” whether it’s true or not. I can’t believe they haven’t even written: “Kaitlyn likes penis.” That message board is a missed opportunity in my opinion.

Last night was mostly usual chatter because the eventful stuff happened during the evening.  I’ll just recap what happened yesterday by going over how it could impact things moving forward for certain hg’s  instead of telling you what time people fell asleep last night.

Fessy could end up in trouble if Level 6 gets the next hoh but there wasn’t really anything else to say about him. Likewise, if we have a Hayleigh or Rockstar hoh, Angela and Rachel could be in trouble just as easily as the guys in their group. Kaycee and Hayleigh appear to be the safest people at the moment but the power apps could change everything. I’m anxious to see the campaigning the next couple of days. There’s alot of time left and either one of the Bozo Bros could go home this week.