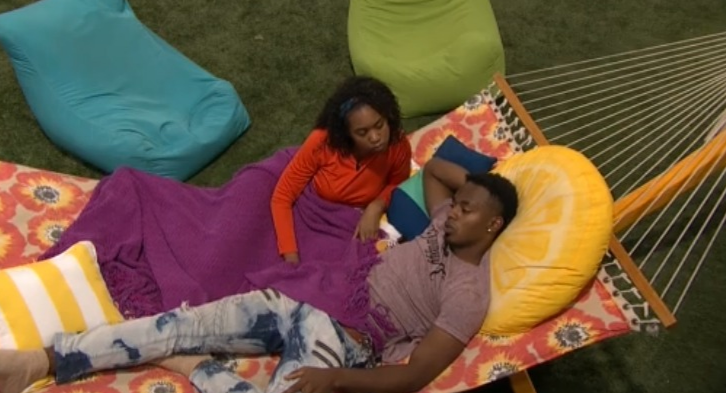 The houseguests got to hang out in the backkyard after being locked down for a while so they seemed to be making the most of the outdoor time. The biggest things to happen yesterday was some secret sharing and talk about it carried over into the night. I’ll just give you an overall summary of these talks because most of them won’t matter that much if Kaitlyn sticks to her plan of backdooring Swaggy. They also tell us who has a good read on the house and who doesn’t.

We know Kaitlyn told Hayleigh the plan to BD Swaggy yesterday and  Hayleigh told Rockstar shortly after. Kaitlyn asked her not to but we knew she would anyway. Actually, Kaitlyn said what she might do was messed up and Hayleigh guessed so she’d already seen it coming at least a ltitle bit. I was impressed by the way Hayleigh handled it. She didn’t give away she was upset but she was furious. Rockstar had a more vocal reaction once she was told but she had that luxury since Kaitlyn wasn’t there. Hayleigh quickly realized 3 things: she couldn’t change Kaitlyns mind, Tyler was running Kaitlyn and they wouldn’t have the votes to keep Swaggy. Some reactions I read online yesterday felt Hayleigh was being disloyal but what’s she supposed to do? Throw her own game away to prove she’s loyal to Swaggy and Bayleigh?  Hayleigh DID question Kaitlyn more later in the evening and tried to plant doubt in Kaitlyns mind about this decision but it was obvious Kaitlyns mind was made up. Hayleigh and Rockstar talked about plans moving forward and how to regroup. Hayleigh will be more adaptable because she’s already formed some relationships with the other side of the house. As much as I’ve grown to like Rockstar, she’s made very little effort in that area, probably knows she’ll have a harder time and based on the way she talks about the other side of the house, she has no desire to be adaptable. Hayleigh was upset when she found out that Kaitlyn told the Bros that she knows because she really wants deniability in this situation.

Bayleigh wanted reassurance from Hayleigh that Angela will be the replacement nom and Hayleigh gave it to her. She told Bayleigh she thought that was still Kaitlyns plan. She knows she can’t change what’s happening and she DOESN’T want to know about it ahead of time.  Bayleigh, like Swaggy, Fessy and Scottie are only concerned the veto won’t be used and Scottie might go home. They don’t see this as an immediate threat to themselves, just a threat to them later on.

Kaitlyn talked to Hayleigh about possibly form a group with Hayleigh, Rockstar, Fessy, Tyler, Brett and herself. Kaitlyn doesn’t know Hayleigh and Rockstar want Tyler out but Hayleigh said the usual “great plan” things so we’ll have to see where it goes.

Rockstar and Bayleigh had a talk about racism, who the viewers like and who the underdogs are in the house. Rockstar and Bayleigh “know” viewers love the Bros and they don’t understand why we arn’t on the side of the underdogs=themselves. I’m very confused by this because I don’t know what they’re basing this on. Only 1 person has been evicted, they don’t know who has the power apps and one of the crap apps was given to the other side. How are they underdogs? The one person in their alliance who they had sort of stopped trusting won hoh, that’s the only thing that’s really happened to them. Bayleigh doesn’t know Sam got the power app last week and is convinced she got it this week. They view Sam as a neutral player so again, why do they think the Level 6 side is being shown all the love? They know they can’t trust Tyler anymore but thy see him as neutral too. It’s his hoh Steve went out on.  Rockstar continued to keep her mouth shut about what she knows but you can see, it’s really wearing on her.

Swaggy, Scottie and Fessy talked more about their uneasiness with Kaitlyn. Scottie is feeling a little more confident that Kaitlyn/Tyler is going to take him off the block. Fessy firmly believes that Kaitlyn wouldn’t do anything against him this early in the game.  Swaggy is the most unsure but says if Kaitlyn follows through, he won’t have any more trust issues with her. It’s important to note that Swaggy isn’t concerned he could go on the block, he’s only concerned she’ll leave Scottie up there. Swaggy continues to be nervous about Tyler because the way he sees things, Tyler is Kaitlyn’s puppet and he does whatever Kaitlyn says. If Swaggy had spent a bit more time with people other than Bayleigh or a little more time with Kaitlyn, he may have things figured out better than he does. He also sees Tyler as with them for now but knows he can’t trust him long term.

All of Swaggys alliance is VERY upset with Tyler and feels betrayed. I don’t get this. When exactly did they invite Tyler into their alliance? Oh, that’s right, they didn’t. When he won the first hoh, at what point did they ask him his thoughts? Oh, that’s right, they didn’t. They just stormed the hoh room, told him he needed to put up Winston and Angela and then Swaggy proceeded to lay out his entire game and alliance to Tyler…unprompted. Oh yeah, Swaggy finished it off by letting Tyler know he was the boss and controlled what his side would do. I can’t imagine why Tyler started thinking Swaggy would make a good target, can you?

Sam told Tyler the details of her power app last night and how it gets used automatically on week 4 if she hasn’t already used it. Winston chatted with Sam during a different time in the evening and kept hinting about the app. He wants her to offer to use it on him so badly but he isn’t supposed to know she has it. She never caved or gave him any info. Remember, Winston was talked into keeping Sam last week so they could use the app if needed. Tyler convincing Winston that Sam would use it on him was almost as crazy as Tyler convincing Kaitlyn to vote out Steve. Tyler has been working for that money ya’ll!

They spent time in the hot tub, on the hammock and played some games last night with mostly the usual house chatter. Mondays are my busiest morning for work so I may have left some things out but tried to let you know where peoples heads are at going into today’s veto ceremony. Steve is going to have the good stuff anyway later today after this all  goes down.

There are a couple things I’d like to mention that really isn’t about last night specifically. Some Tyler fans are already starting to turn on him because he’s getting to much power from what I was reading at different places online last night. It always happens so I’m not surprised. We love an underdog and it’s that simple. I even saw it compared to Paul’s safety from last year. This is ridiculous because when you realize what Tyler actually has, it may not even be that great and Sams is better. He has to use this prior to the nomination or veto ceremony which means he has to be able to predict what’s going to happen. Not only that, he’d be crazy to use it at a nomination ceremony because once he does, they can just try to backdoor him. If he saves it for a veto ceremony but gets put on the block during the initial nomination ceremony, it doesn’t help him at all, hed already be otb. I don’t even think the 8 week time frame is a big deal because I think he’ll be in trouble sooner than later and if it’s helpful at all, it probably won’t last long. Let’s be real, Tyler has controlled this entire house up to this point, not because of a power but becauae of his game play and only his game play. I think he did too much, too soon and will be a target because of it but for now, I’m going to give him the credit he deserves.

The vegasforsure person said Bayleigh was close behind Tyler in the voting. If this is true and even if it isn’t, I look for her to get the next one if Swaggy leaves this week. She’s going to get the unfair, ripped apart shomance edit like Jessica did last season. She’s also playing the game enough to be in the running without the edit. (Not since Kaitlyn’s been hoh but she was visible enough prior to that to carry her through) I really don’t want to see Swaggy leave yet and I’d love to see his power trip if he stuck around and won hoh.  I’d around so like to see Bayleigh get the next power app and watch her use it to try and seek revenge for this week.

Have a great day and I’ll catch up with you guys once all this goes down this afternoon!