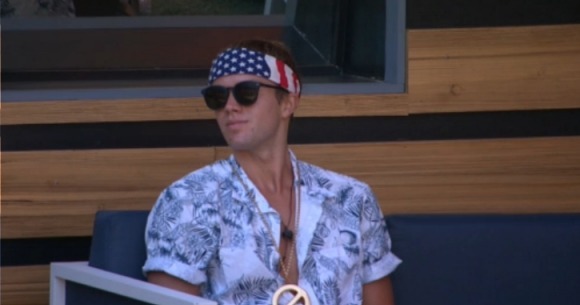 Good Monday morning! Yesterday was rinse and repeat in the conversation department. They were outside so the scenery was different and a couple thing were solidified but it was mostly the same thing over and over. As usual, I’ll give you my thought on a few things and then go over the highlights from the day.

The episode:  I didn’t realize the show would be delayed where I live so only the first half recorded. I’ll catch the 2nd part once they put it on the CBS site. I didn’t see the hacker comp play out so I don’t have much to say about Sundays show. Here’s the few things I did take note of:

There’s been a lot of floater and underdog discussions lately. Rockstar and Haleigh call the other side floaters about every 5 minutes so I thought I’d join in and give my two cents. I don’t know how anyone can think there’s a dominant side and an underdog side this year.  Underdogs can’t catch a break because nothing goes their way. How does that apply this year? The original group of Foutte plus the players working with Foutte (Steve & Scottie) have won just as many comps and had as many twist/apps go in their favor as L6 and the people working with them. (JC & Sam) Being outsmarted doesn’t make you an underdog, it just makes you bad at BB.

This also isn’t a house of floaters, not that I think the term should be an insult anyway. Some of the best BB players floated and rode the middle until they needed to choose a side. We’ve had two strongly defined sides this year (reminds me of season 6 a little) with only 3 people who could have potentially floated out of 16. Scottie started out that way but even he isn’t really floating. He picked a side and people see it. He just tried to switch sides a couple of times so he’s more flip flopping. What Sam is doing can’t be considered floating either. We don’t have a term for what she’s done so far unless they have a nickname for the production employee who tidies up the house during an hoh lockdown. We’ve never seen her game before and a waste of a spot is the only thing I can think to describe it.  She isn’t playing, she isn’t floating, she’s just there.  JC is the only true floater this season and he’s done it amazingly. I didn’t have high hopes for his game the beginning of the season but he’s really surprised me. He’s slowly being outed and this week should end it but he pulled it off for a really long time.  Tyler, and now Brett have worked undercover for L6 but certainly not floated.

I’ll move on to some highlights from yesterday and there were few:

I’ll be so glad when the veto ceremony is over because RS will still complain but maybe we’ll get some new sentences at least. They’ll be mad and surprised even tho they shouldn’t. This week should be good and I don’t see it slowing down. Soon, Tyler’s side will be obvious, (should’ve been already) Brett may have to give up his new fake friends and JC’s floating should be over too.