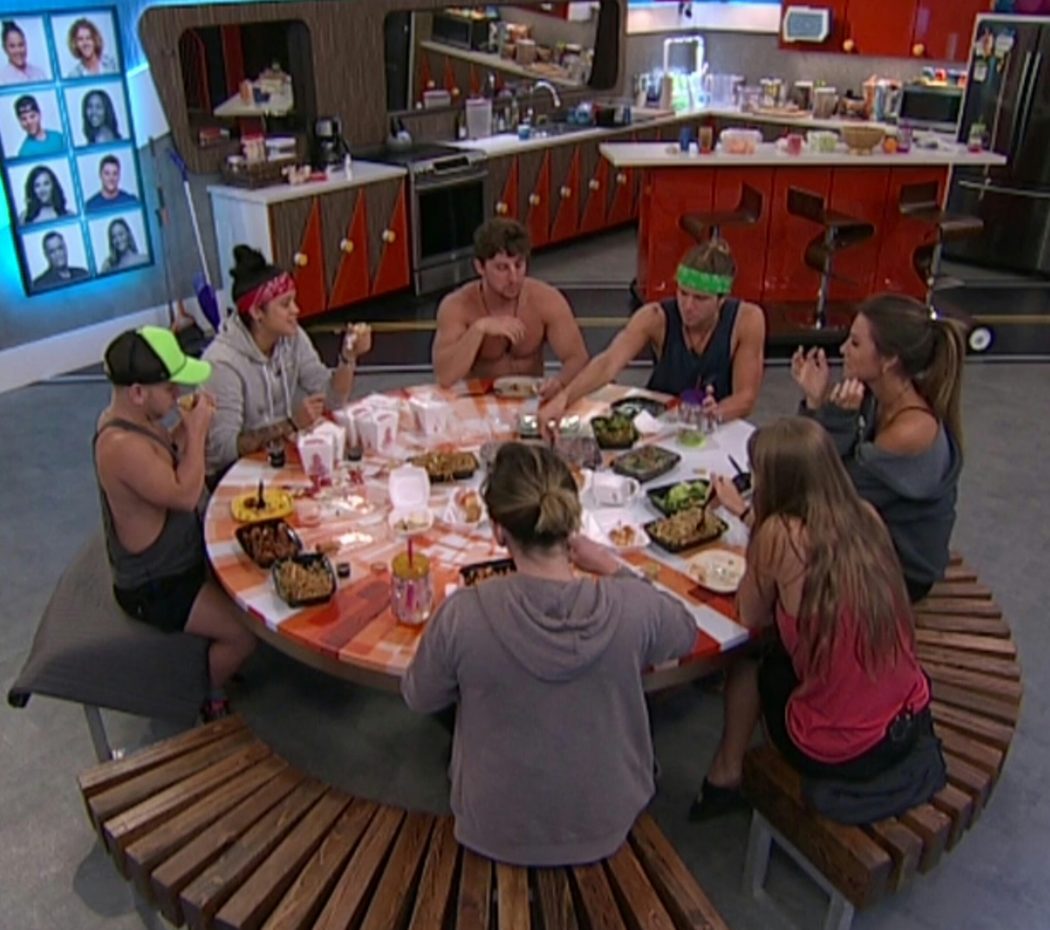 Good morning! I usually get a head start on the Monday recap sometime Sunday night because Monday is a busy work day. I couldn’t do that last night because when I finished watching the episode, I sat there trying to figure out what I’d just seen. Honestly, I’m still at a loss so I’m going to wing it. I’ll just toss things in here, none of which will go together or be very relevant….sort of like Sundays show.

The last time I can remember seeing something as strange as the episode was at least 15 years ago. I was in a tiny town and was at the City Hall building. It was one of those that is used for about 5 purposes and about the size of my living room. There were two elderly men (both in their 80’s) who got in an attempted fist fight right there on the steps. I say attempted because they swung on each other, no one made contact and one fell down on his own. The entire thing was in slow motion, not because it was scary, it was ACTUALLY in slow motion. I was terrified the one who fell may have broken a hip. They both appeared to be ok after and I never knew what caused it but it was a strange sight to see.

It was a slow day in the house which isn’t surprising. We’re late in the season and we already know who’s going home. I keep seeing complaints on social media about how boring the season is now that the “fun” people have left. I guess I don’t know what people want to see because Bayleigh and Swaggy isolated themselves in the pink room for 2 weeks, barely socializing with anyone. Rockstar complained all the time about the people in L6. Fessy and Haleigh had an argument and a makeup session daily and Scottie didn’t do anything. Things changed when Kaitlyn left but hers was the only noticeable exit imo. The game has continued without them and the biggest slow down was caused by the battle back. Things also naturally slow down at this point because there’s less people in the house, no matter who those people are. There’s less activity on the feeds and the updates become shorter. It isn’t a reflection on the season, it’s just the way it is.

A few things happened earlier in the day:

Here’s my PSA for the day:  JC isn’t going to be evicted. It’s fine to hope for it but I don’t want you “fustrated” when it doesn’t happen so I keep trying to prepare you. NO ONE in the house and I mean, NO ONE except Angela wants JC to leave yet and she isn’t even 100%. He factors into most people’s end games and they’re playing to win, not to make us happy. Personally, after recent seasons, I’m glad we have players who want the prize more than they want instagram followers. He could leave in the double but even that is doubtful because Sam is next on the list for L6. Like Haleigh, but to a lesser degree, they don’t want Sam anywhere near finale night for fear she could win with a bitter jury. They’re smart enough to realize that JC will make people mad when they find out he sabotaged them for 2 months.

Regarding the episode, I don’t even know what the hell I was watching last night.  It was the most disconnected show I think I’ve ever seen. I know they need content for the Sunday show but this is what they came up with? Really?

We saw a segment on Angela’s sniffer which is apparently a super power. (I did think of the febreeze on the pillow when I saw it)  They tossed in a JC hula hoop clip that seemed very out of place with a lame joke from Brett.  We heard about Angela’s childhood with gymnastics. (We already knew and the clip was old but it’s good the tv audience can see her as an actual person finally) None of it was bad but together, it made no sense.

The only part of the episode that came close to including what was going on in the game was this image. Sam is standing by herself while the rest of the house watches the activity downstairs together: 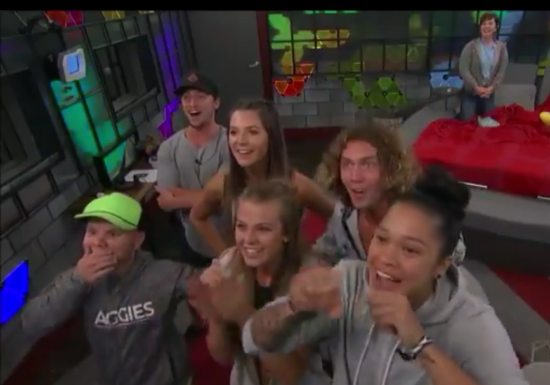 It felt like half the show was the proposal. I know it wasn’t but that’s how it seemed watching it. Maybe if the current hg’s came downstairs sooner or if Victors video was shorter, it wouldn’t have felt that way. It was like watching a reunion special of past hg’s that had nothing to do with this season or showing up to a private party that you weren’t invited to.  The people who were there was weird too. I understood the relevance of Paul and Derrick but it was like everyone else was there because they were already in town for something else.  They thought, what the hell…I’ve got time for cake before my plane leaves LA.  Normally, I’d think something like that was cool to watch but last night didn’t have that effect on me. I admit, I did feel a tad emotional seeing how in love they appear to be with each other. It was also touching to see Victor get the girl that feed watchers clearly saw he was crazy about during their season. 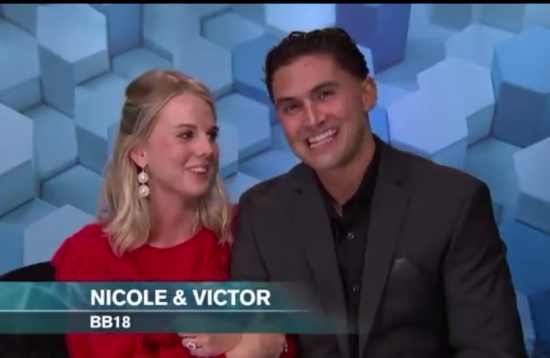 There were a few things that took away from Nicole and Victors moment for me though. Seeing clips from their season knowing they were carefully selected so Corey wouldn’t be in them was a bit strange. They way Nicole was glued to Corey, I’m surprised they found that many. I also wondered how many tv only viewers were confused. Were they questioning their own memories about who Nicole was with during BB18? (ok, that part was a little funny to me)  That entire situation took away from the romance and sentiment of proposing to her where they met. It’s the same house where she’s had 2, not 1 but 2 other boyfriends. I couldn’t shake that so it made the whole thing feel too forced, for me anyway. Maybe this is just me, but I also didn’t think it looked spontaneous. Nicole looked genuinely surprised to see Victor shaved and with a hair cut but the proposal didn’t seem that way.  I also didn’t think Nicole was confused walking around the empty house wondering where people were. I mean, it’s fine if it wasn’t a shock. They’ve probably talked about getting married and when he popped up on screen, maybe she kind of knew. It’s probably just the BB episode critic in me that makes me think they did several takes the way they do for the ceremonies. Maybe I’m a realist more than I’m a romantic and if so, that’s my issue, not theirs. Either way, I’m happy for them and their future. (I mean, Ubly MI, he’s gotta be madly in love!)

Corey tweeted this shortly after the episode aired: 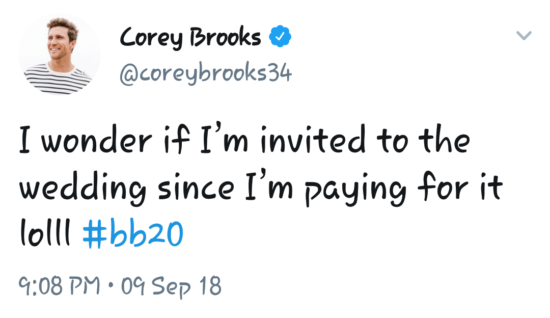 I’m probably not going to pick on Julie’s wardrobe anymore this season (unless I’m forced to) because she’s got enough problems right now. I will comment on Nicoles blouse, flowy curtains thing. She’s a tiny girl for whatever this thing is but maybe it’s hot right now in Ubly. Don’t know, never been to Ubly… 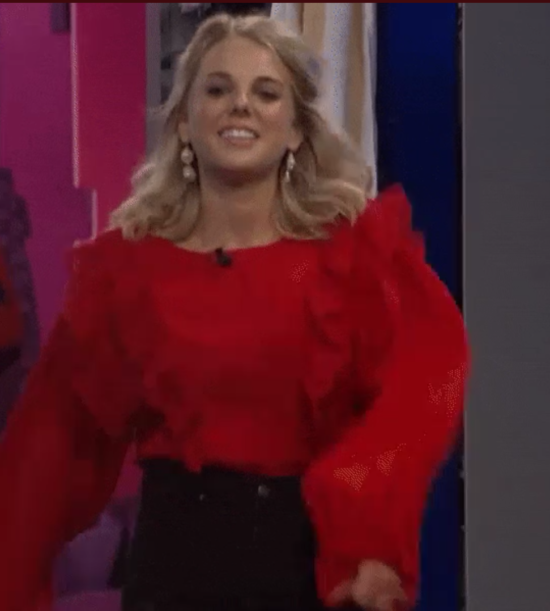 My positive takeaway from the episode:  I loved seeing Britney!  Even tho the shade was minor, she still gave us a little in the DR towards Nicole and Victor. She was both likable and petty, just like old times. 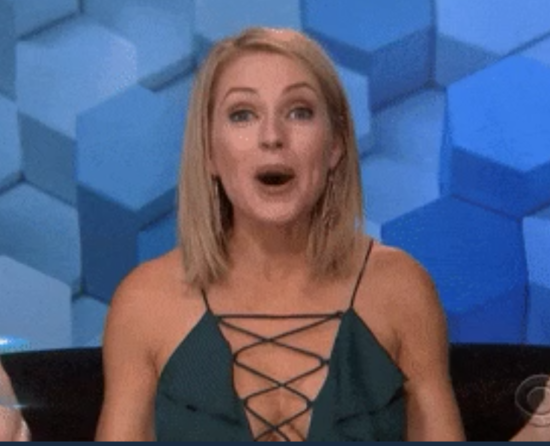 The episode ended with Sam saying she’d rip the doors off the hinges and tear the mother f”ers up. WTH? It was funny but nothing went together last night at all! It was sooooo out of nowhere! 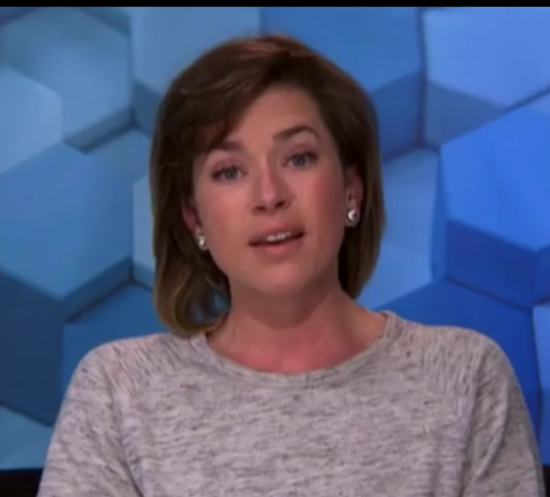 I was going to chime in on the news of Les Moonves leaving CBS but it will have to wait. Gotta go to work. Have a great Monday!