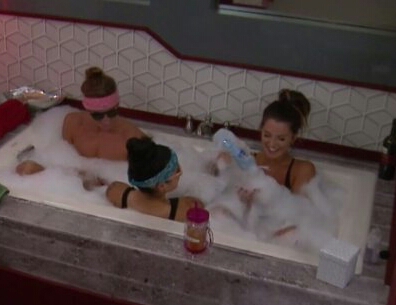 Good morning! It’s the start of another work week but near the end of a BB week. It sucks when the feeds go down for so long like they will tomorrow but we don’t have to wait as long for the eviction and as a bonus, Sam will finally leave. (I’m a glass half full type of person) It’s no secret that I’ve had absolutely no use for her this season and as I’ve said, you don’t have to play well, but you do have to play. I’ve complimented her creativeness in the past and I’m impressed she’s quit smoking while inside the house. I also like seeing someone find a way to entertain themselves in a place where there’s nothing to do. Those are the positives but she couldn’t be bothered to play the game so I’m not going to waste my time talking about her.  That’s it, nothing else to say about her unless it comes up in the recap. See ya later, so long, good riddance!

Yesterday was uneventful and the conversations we did see felt more like wrapping up loose ends than anything else. JC realizes he’s screwed but he’ll have to win the next hoh to do anything about it. It’s a waiting game for now. Here’s the rundown of the day:

I love blindsides during evictions but I’ve been dreading the moment JC is told about L6. That’s the game and JC did it to himself but I don’t have to be excited for it.  (I’m sure I’m biased because if it were players I didn’t like, I’d probably get popcorn for it. I may be a hypocrite sometimes but I will acknowledge those times) I kind of hope he flips out and goes off a little. It’s more entertaining when I don’t feel sorry for them and I can just watch some drama unfold. I was the same way in season 12 when the Brigade told Britney. (My bias again because I loved Britney) I felt bad for her and it’s the same scenario.  She was working with the 3 of them but thought she had a F2 with Lane. It’s also the same in the way Angela & KC are looking forward to it (like Enzo & Hayden) and think everyone’s going to have a good laugh about it. Tyler is like Lane since he knows it won’t be funny at all and he’s going to take the heat because he was the one who promised the most. Tyler needs to come up with a reason to avoid springing it on JC this way if possible and not for JC’s feelings. He needs to change the plan for his own end game. KC & Angela need to push to do it this way for the same reasons Enzo & Hayden did…make sure JC’s good and pissed…at Tyler. Tyler’s also crazy if he doesn’t tell Sam the truth before she leaves. It’s one thing to blindside someone like Haleigh or even Brett for that matter.  Their F2 was made so late and Brett suggested changing the F4 plan which Tyler could lie and say made Tyler nervous.  Someone you’ve had a F2 with this long needs to be handled differently, 2 someones in this case (Sam & JC).

Moving on to the evening feeds:

JC had a good time even though he knows he’s in trouble. I think Sam knows she’s in trouble too. She said something about making a steak tomorrow. (She’d saved one to thaw and cook when she’s leaving, at least that used to be her plan)

I liked the posters from the comp last night. I didn’t like the concert tho. I’m sure it’s cool to have music played just for you but it didn’t play well on tv. Tyler and Angela had already mentioned the Meant to Be song days ago. Angela was either already familiar or it could’ve been included in their wake up music recently so they could get familiar. Watching KC and JC was ok but watching Tyler & Angela felt like being the third wheel during their first date. (That’s a weird thing for a feed watcher to say) Seeing Sam was like intruding on a private religious experience or something. I’m not sure how to describe it, I just didn’t enjoy it. Maybe I was distracted too because I wanted to have the ability to push Bebe Rexha’s hair out of the one eye that was covered. I’m sure it’s meant to look sexy but how sexy is it if you trip over a cord and fall on your ass because you can’t see?