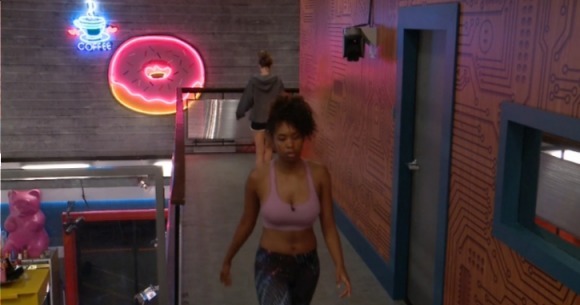 I woke up this morning and checked the twitter program thing and see the new thing today is to say that Bayleigh is being bullied by the house.  What?  According to Swaggy, Bayleigh is currently undergoing a bullying session on her way out the door. I’m no fan of people being bullied and was sick to my stomach last year when I watched a house full of people yell insults across a yard at two people on a hammock trying to deal with their last week together. So, how bad is Bayleigh being bullied?  Let’s take a look…

Brett is going to wear his Granny shirt to the live eviction – I listened to him talk about this and it was during a discussion trying to get Julie Chen to actually talk to them this week. He said he wanted to wear his Granny shirt because it looked funny and he wanted Julie to question him on his experience.  Apparently, Bayleigh has a fear of grannies (?) or sweatshirts (?) which Swaggy is taking offense to.  Ruling: Not bullying

Tyler is treating Bayleigh poorly – Tyler is upset because he thought Bayleigh had his back and thinks she was the hacker who put him on the block and nearly sent him home (had his side not won PoV).  He had a brief confrontation with Bayleigh shortly after the PoV ceremony but has not spoken with her since. Ruling: Poor jury management but not bullying

Scottie is going to wear his Swaggy C shirt to eviction – I didn’t hear Scottie say this so I can’t say for sure his reasoning behind it other than trying to kiss the asses of Angela and crew. Definitely a stupid move that doesn’t benefit him at all. Ruling: Poor jury management and slight bullying as being kicked while down

JC wants to bring a back of chips to eviction – This is in regards to JC trying to take some chips in the HoH room during Bayleigh’s reign. She snapped at him which upset him. JC is trying to be funny with this move but it’s not a good look. Like Scottie, this move is pointless and should be skipped. Same ruling as Scottie:  Poor jury management and slight bullying as being kicked while down

My ruling is that Swaggy is exaggerating the way Bayleigh is being treated, but there are two people who want to take shots at her on the way out the door which is tactless. She’s not spending the week being bullied by any means, but people are not thinking long term when it comes to jury management.  The Brett claim is just completely foolish and has nothing to do with Bayleigh.

Time for some updates as we wait for Haleigh’s house meeting:

Alright, gang. What an afternoon!  I’m going to step away from my computer for a little bit and create a new thread when I get back for the nightly post and to recap this afternoon. Wow.