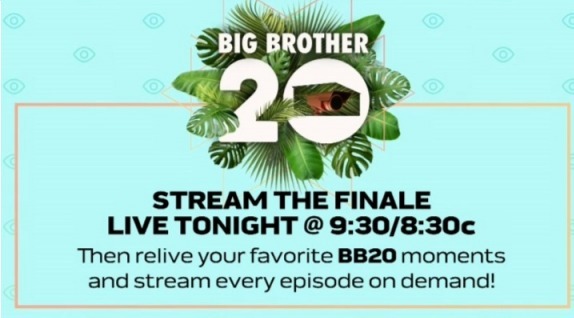 Big Brother 20 – Thoughts And Thanks Before Finale

Well, that’s it for the unofficial summer. When Big Brother ends, summer is over. The feeds are down and won’t return until the middle of winter when we get to potentially see a fun season of celebrities dealing with 1/3rd of a real season or a bunch of babies leaving the house because they got their 5 extra minutes of fame.  Last year, I was on vacation during the first week which is almost like 3 weeks of real Big Brother time, so I never fully got into CBB the way I should have. I have no vacations scheduled so I will be here blogging no matter what. I’m sure watching the feeds from the beginning will help me get into the show more than I was last Feb.

Also, I will be live blogging tonight but that should be expected.

The point of this post is to give thanks. Thanks to the cast of Big Brother 20 for actually giving us a great season full of likable people on both sides of the game. The biggest rivalry was between Tyler and Haleigh who are both great people and treated each other with respect despite wanting to get each other out. Those two people summed up the entire season that was virtually opposite of the season prior. Rather than a house ganging up on one person weekly and making them feel like shit before evicted, the sides became clear as day from the beginning and remained that way. Even when one side was wiped out and there was only 1-2 remaining, the larger side did not bully and make that person miserable before they left.  It was a classy season by classy people all around. I can’t say enough good things about this cast and I’m happy to have blogged them.

Another thanks goes out to you, the reader. I know you hear musicians say this all the time… ‘brooo, I want to give thanks to the fans because without you, I’m nothing’ … but that’s because it’s true. Without the readers of this blog, it’s just Mel and I writing to each other about what we think of the show. The interaction in the comment section is what makes people come back and I really hope I figure out a way to have the site be more interactive in the future where communicating with each other doesn’t feel so clunky and old.  We’re almost in 2019 and still have the same comment system I’ve been using since Big Brother 13. Hopefully, that will change by next season.

Speaking of readers, I want to give another thank you to everyone who has donated this year. After website bills were paid, I was able to actually compensate Mel and NK for their extremely hard work throughout the season. My email was not working properly throughout the summer so I didn’t get all the emails which will allow me to thank you directly like I’ve done in the past but it means a lot to me!

And speaking of NK, I want to thank her for the tireless work she puts in moderating the comment section and providing late-night updates. This is another area I’d like to change for future seasons and her updates are beneficial to so many who don’t want to scroll through the big comment section and more people should see them.

Finally, I saved one of the most important for last. My partner in crime on this site – Mel. When I first started doing this site, I would be a ball of nerves and stress throughout the summer because I’d watch the feeds late into the night then stress the next morning about getting an overnight recap up before starting all over the next day. This admittingly made me have more disdain for what I was doing and I’d end up super slacking by the middle of the season trying to take an exam with cliff notes. It became super obvious through my first season or two when people even commented how wrong I was on so many things in the house.

I had my pal Amy come along and take off a ton of that burden but real life came calling for her and she had to step away. Amy was a fairly popular blogger here, but Mel stepped into her role and did a phenomenal job filling in the void that was missing when she left. I can’t thank her enough for her hard work throughout the season!

Oh, I can’t leave out another important person – my wife, Melinda! Not only does she tolerate basically being a ‘Big Brother widow’ throughout the season, she also goes through and proofreads many of my posts because I’m really not that good of a writer.

See you in a few hours!