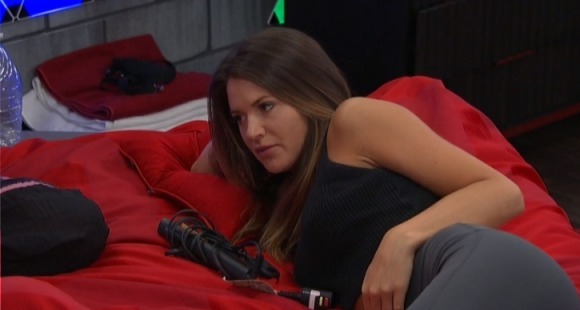 Good morning! I’m operating on a little less than 2 hours sleep so I’m sorry in advance for whatever you’re about to read. Have you ever taken cold medicine at bedtime and then had the drowsy part of it backfire on you? Well, that was my night. It feels like you’ve drank an entire pot of coffee with a sleeping pill chaser. I didn’t miss the show last night because luckily for me, I’ve given my husband my cold so he didn’t feel like celebrating his birthday! (Kidding about being lucky….sort of)

As you already know, Angela is the new hoh. I loved that it came down to Angela and Rockstar since those two can’t stand each other. That’s the 2nd comp Rockstar’s done very well in and I could see her winning one if she’s there long enough. She’s going to be Angelas target unless Tyler changes her mind or the apps mess with who ends up on the block. I’ll backtrack and go over the night and why Rockstar’s public enemy #1.

Before the live show:  A short time before the live show, Tyler told Bayleigh that Rachel had approached him, told him about Bayleighs power and said Rachel wanted the two of them to work together to get Bayleigh out next. He said he was sure she was the single vote to evict Kaitlyn in an attempt to frame him for it and he was going to vote to evict her. Bayleigh still thought they had the votes so she was fine with Tylers decision. This is why he wasn’t included in the names being tossed around trying to figure out who flipped last night. He was upfront about his vote and he’d planned it that ways days ago.

Thursday episode: Brett will be the king of BB20 speeches regardless of where he places in the game. We’d talked about him maybe losing Sam’s vote but once I heard his speech, I wasn’t worried about it. He told his made up stories about Rachel but since he didn’t get nasty and take personal digs at her, Sam didn’t have a reason to be mad at him. I remained about 25% worried over JC’S vote though until he said Rachel’s name. Here’s a few thoughts on the episode:

Steve covered a lot of what happened after the feeds came back  and it was what we expected. JC planted seeds of blame, Fessy looked like he forgot his own name and Hayleigh went looking for chapstick to kiss the the butt of the new hoh. Rockstar was crying because her nemesis was still in the house, Tyler spread his cover story around about his vote and Sam went back to the kitchen. (probably whipping up some homemade jam or taking apart the cabinets to repurpose them to  build an airplane)

Feeds After Eviction: Everyone was pointing fingers to find the one who flipped. Rockstar was quick to blame Hayleigh, Fessy fell under suspicion but they mostly settled on Rockstar. JC spread a rumor the past few days that he saw RS and Brett talking alone in a room. He’d be ok with Scottie taking the blame but RS was his target all week and it paid off. Let’s look at the detective skills of Foutte/Hive. Here are the 5 most likely options to choose from. One of them is highly likely and three of them are reasonable:

We got a bit more information on the hacker twist. This isn’t for sure because it’s coming from hg’s conversations only. If they are correct, the person who wins can replace one of the noms, choose one of the veto players and take away someone’s vote. While most of the house was still trying to figure out if Rockstar killed Jimmy Hoffa, along with her other crimes, Sam came up with a plan for all of them to simply stop playing BB. She called a house meeting while Angela was having her one-on-ones. People were worried about how much the twist would mess up their games. She said the twist couldn’t mess it up if they agreed to throw the comp to her. She gave her word she wouldn’t use the power to change a nom, she’d choose herself to play in the veto but not really compete and take away her own vote. You may think I’m crazy but I LOVED this idea if it could’ve actually worked. It can’t which JC and RS were quick to point out. You can’t expect a nominee who has a chance to take themselves off the block, not to take it. They may trust Sam to do what she said but they don’t trust everyone else to throw it. I loved it because I believe Sam’s telling the truth and I think the hg’s believed her too. Ya’ll know I HATE unnecessary twists and it’s a way to ignore it the way they ignored the tree last season. If they let Sam have it, someone still wins so it wouldn’t be a complete refusal to participate. People throw comes all the time. If Sam chose herself to play in the veto but didn’t actually do it, it’d be the same thing Caleb did when they decided to get out Frankie in BB16. Obviously, this plan didn’t go anywhere but I almost wish it would’ve. This season is too great to mess it up with some Roadkill type bullshit. We’ll also maybe lose feeds for most of the day today if it’s an individual comp. Oh well, Sam had the wrong motives but the right solution in my opinion. Nobody in productions asked for my opinion so Hacker comp, here we go…

Bayleigh was a complete jerk to RS last night. She wanted to know if RS flipped her vote and she came at her hard. She talked to her in a very hateful and accusing way. Bayleigh was raising her voice and when RS went from a whisper to a regular speaking voice, Bayleigh told her to lower her voice. At one point, she told RS to shut up. (That’s about the moment I’d have been ejected for punching her in the face)  She went on and on about how everybody’s done her wrong, she’s been left out and has no one to trust. RS reminded her that she hadn’t been left out and they have a final 3 with Hayleigh. Bay wanted proof for something RS couldn’t prove. She told Bay to watch the show after, said she’d never done her wrong and said it very sincerely. I noticed during Bays hoh that RS was often her verbal punching bag. Bay insults everyone but she does it more often with RS. Bay’s just pissed she couldn’t keep her big mouth shut about her app and needs everything to be someone else’s fault. After more than one conversation accusing RS, Bay talked to Brett and he confirmed he had nothing going with RS. Afterward, Bay told RS that Brett cleared everything up for her and she knew they didn’t have a secret alliance. This is the moment Bay apologized to RS for all the mean things she said and asked RS to forgive her……ya right! That didn’t happen. Bay told RS she was cleared and basically dismissed her.  (Bay took the word of the person she has no relationship with and just tried to get evicted over someone who’s been with her since the beginning) RS is going to have a rough week. Brett’s still in the house and that and lone had her in tears. Her alliance is doubting her, Bay is yelling at her and she thinks someone on her side is sabotaging them. Oh yeah, she’s also about to be nominated.

Angela continued her one on one’s while enjoying her hoh wine. (She shared it)  She started with the plan of RS and Fessy for noms with Scottie as a potential backdoor. JC talked a lot and she tuned most of it out. Tyler made a subtle push for Bayleigh as a backdoor and told her they may have a hard time getting JC on board to get rid of Fessy. Fessy told Angela he was a straight shooter and a comp beast for the most part. Hayleigh had an idea without Angela saying it who was going on the block and assured her she was ok with it. RS spoke of it being a crazy night, said she hoped she wasn’t going up but understood whatever happened. Angela told Sam to relax and have an easy week because she wasn’t going anywhere. Bay got the assurance she wasn’t going up and spent some of her time telling Angela how to eat her breakfast and how to handle her hoh. When someone knocked on the hoh door, Bay said “who is it?” before Angela could say to come in.  She still thinks she’s in charge, I suppose. Angela told Scottie he may be going up as a pawn but hoped he won the hacker comp or veto. She said she’d take him down if she won. She told him like she told everyone that her noms were going to be based on the only two people she’d heard would nominate her. Scottie admitted he’d said it but said it was because of Rachel and not Angela. He also said it was weeks ago. She’s playing up the hacker comp and saying her noms won’t necessarily be who she wants out because they’re probably going to change. She did not tell RS she was going to put up people who’d “said her name” like she did to most everyone else. As of now, RS and Scottie will be the noms with RS as the target. Angela won’t be upset if Scottie is evicted though.

I had some thoughts on her nominations, targets and the possible app interference but as usual, I’ve ran long with my recap. Steve may be out of town this weekend and I may be doing some daytime updating. If that happens, I’ll go over that stuff this weekend while the feeds are down.