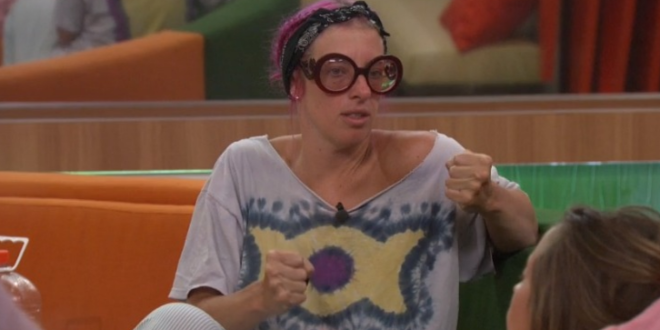 Holy Shmolie! I’m so thankful on this Friday morning that my husband let me off the hook for our evening plans so I could see BB last night, for Steve staying up late and covering most of what happened already, all the comments from last night that made me laugh this morning and for everything about BB20. I always say hinky votes never work out for the people who do it…welllllll, Melissa…meet BB20.

There may be a little overlap from what Steve covered last night but I’m just going to get to it:

The entire hoh comp I kept thinking it should have been a “hair up” kind of Thursday for Tyler so I agree with you Happy. I know Twitter will be a mess today because RS wouldn’t get off Brett and JC said he would flash RS. It wasn’t that serious people and listening to Scottie cheer people on during the comp and call people Daddy was a lot more creepy than anything I heard last night after the comp. I’d also like to know who the hell “Kaylee” is because Scottie kept cheering them on too. It sounded like from talk after the comp, the hg’s didn’t realize the honey was supposed to be sap because they didn’t get the relevance of the honey. I had some thought on the live show  but after the crazy feeds last night, does anyone care?….I doubt it so have a great Friday.