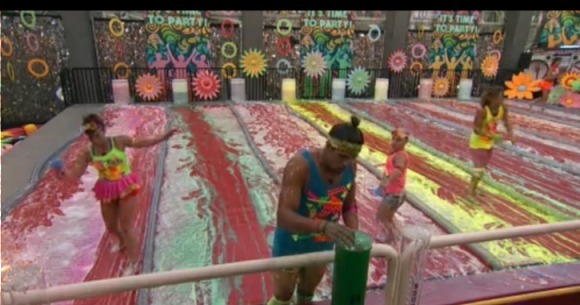 Good morning! No one had to stay up late to find out who won the hoh comp. In case you missed Steve’s updating last night, it was Fessy. I suppose the win helps even things out a little. Fessys side (all 2 of them) can’t play BB so they should at least get to call the shots. I don’t know the shortest time for the slip & slide comp in the past but last night had to beat whatever it was. It normally goes for over an hour, sometimes longer. I didn’t even hear much complaining about people being sore. Fessys back was bothering him and Angela took some Advil last night but nothing like it usually is. Caleb had to be practically carried to the shower the year he won. It looked easier last night. The “cups” were larger, the thing they fill looked smaller and the lanes even appeared shorter.

Rachel’s been a pretty good sport on social media but she’s still butthurt with Angela and Brett. She was very happy with Fessys win but says she still wants someone from L6 to win. (Only Tyler & Kaycee tho)

It was obvious this was Fessys comp to lose and you could tell even before the live show ended. Unless he fell and broke a hip or Haleigh started undressing, he had this one in the bag. Scottie was right behind him though and Tyler and Angela were doing very well too. We have a lot of athletic people this season! Fessy is a pure all-round athlete, Tyler’s shown himself to be very fit with a sports background and KC’s a professional football player who’s played other sports. Angela was a gymnast and pole vaulter and even though Scottie was cast as the “nerd,” that isn’t really who he is, Scottie’s very athletic. He’s similar to Cameron who went out first last year. They needed a nerd so he pretended to be one.

There was a plan in place when everyone went to bed last night but I still think anything could happen. Haleigh will have a lot of input with these noms. She had an opinion after the comp which later changed (with the help of wine and JC) so when she wakes up with a wine hangover, will it change back? Who knows? When Fessy filled out his paperwork with hoh requests in the beginning of the season, he requested alcohol even though he doesn’t drink. He figured he’d let the other people in the house have it. (That was nice) The “other people” turned into Haleigh and JC. Haleigh often mentions her family watching the show and not wanting them to see her kissing or anything else. I think that’s a smart decision but looking like a wino might not be the best look either. (Just sayin’)  My daughter’s also in her 20’s but can handle her alcohol better than Haleigh so she wouldn’t be too embarrassing in that department. My son is also in his 20’s but isn’t much of a drinker so he’d probably turn into a complete moron if he was in that situation. (He played college sports too so maybe he’d have won the hoh and wouldn’t have to worry about it) I guess my point is, as a huge BB fan, I’d be fine if they got drunk because they’re adults. However, if they got drunk AND tried to play the game at the same time, I’d be throwing things at my laptop. Anyway, moving on to things you actually want to hear…

Zingbots coming next week and I’ve already said he better watch his ass around Sam. She’ll have his parts ripped off and turned into a homemade kitchen appliance before he knows it!

After the hoh comp:

That’s what happened last night for the most part. I know the plan is to go after Scottie, make a deal with Tyler and leave Brett as a possible casualty. I still think anything can happen and nothing is set. I can’t believe L6 may actually get away with blaming the vote on Scottie. If they do, how can anyone not be impressed with this alliance? I don’t get how anyone can’t be impressed already no matter who their faves are.

Haleigh mentions AGAIN hearing the crowd so she thinks maybe RS was working with Brett all are long are longed flipped the vote to keep him. She thinks maybe the crowd was happy she was evicted. I have issues with production and Julie Chen this year (who looked lovely last night by the way) but I’ll save it for a slower day.

A few things from yesterday before the live show: Here’s s picture of the jacked up haircut Haleigh and Tyler tried to give Scottie. Sam got mad and tried to fix it. 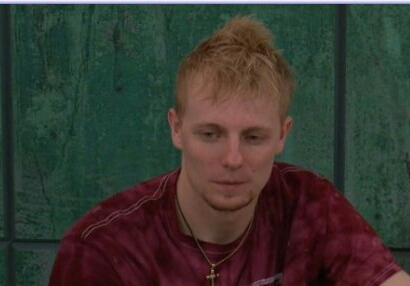 This is Tyler’s face when he, Fessy and Brett heard the crew working on the comp set up. They heard people talking and think they said something about slime and sailboats. 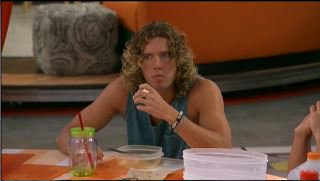 This ones fuzzy but oh well…After JC shaved his head again, this is Sam shaving what looks to be JC’s butt crack. Thought I’d leave you with that one… 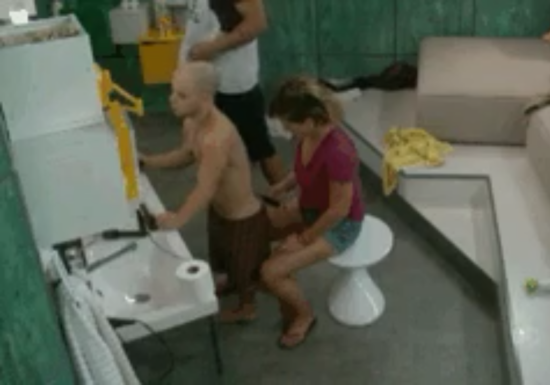 Steve will get you the nomination results when they happen. Have a great Friday!