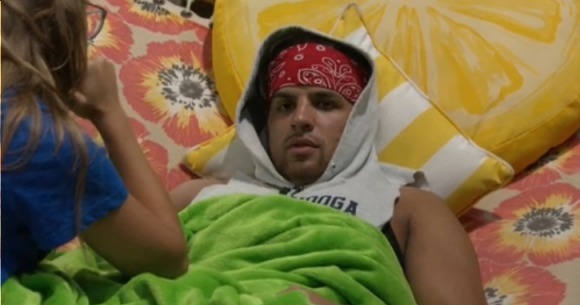 I usually keep some distance between Mel’s overnight thread and the first feed thread of the day, but I’m bored so I wanted to get this one going. If you missed her thoughts, check out her post here.

I’m not quite sure what to expect today as the dust has settled from the nomination of Bayleigh yesterday with a monumental dud as a result. Judging by how she handled Swaggy’s backdoor and subsequent exit, I really wasn’t expecting the drama that everyone else was. I think Bayleigh is a lot more talk than action when it comes to flipping out. I do know Swaggy’s eviction was still in the time period where houseguests are fairly sane so her past actions don’t guarantee future moves, but I still don’t think she’s as aggressive as people like to think.

When I think about it, I’m not really sure anyone in the house is other than JC. He is the only one who really has a temper as everyone else has remained very cool this season. RS had her little meltdown after Brett called her out on TV, but that was unfortunately short-lived.

Before I begin updates, I want to throw out another little plug. I don’t personally promote very many products, but I do want to share and offer with you guys.  If you download the Lyft app through this link, your first two rides get $5 knocked off the price each. No tricks, no gimmick. If you take a short ride that is generally only $5, it’s free for you (don’t forget to tip your drivers!). I personally like to park close to events in a super cheap/free parking lot and then take a Lyft to the place. No parking lot hassle or insane rates, and you get front door service.  Alright, enough of this plug. Just download the app and put it on your phone just in case you need it.

Closing this thread because it’s too long. Here is the nightly feed update thread