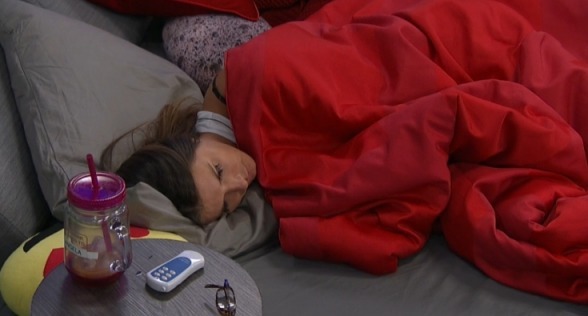 Oh boy, I think it’s going to be a long week in the Big Brother house. They are locked in already due to the Battle Back competition, so this afternoon already features Angela in bed and Tyler playing with his new luxurious hair.

The week is mostly going to be spent with people just in bed chatting with each other speculating about Thursday night. They know it’s going to be something because of how early the backyard has been closed, so they’re expecting the Battle Back, double eviction, or both.

There is a story kind of brewing and that is what happened last night. Around 12:40 am, Brett was in the HoH venting about Sam. I guess the intercom was on so anyone in the kitchen can listen to the conversation and Sam was in the kitchen!  This is just a night after she overheard JC talking really loud about her from the HoH room while she was cooking. Uh oh. She already approached Brett today about it saying he should just say things in front of her and he brushed it off.

I’m going to jump in watching the flashbacks first…