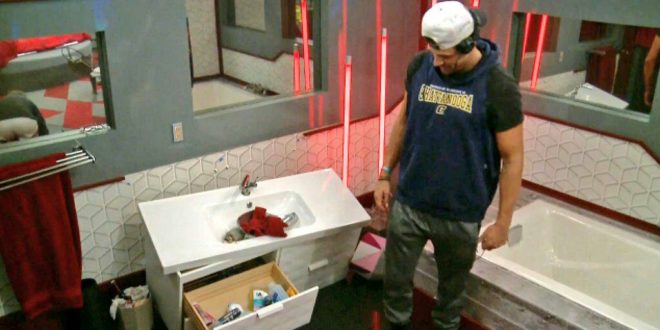 Good morning! I went to the movies last night so I had to look back and see what I missed….nothing. If Steve doesn’t have to change the picture I added, its the hoh bathroom sink. Fessy leaned on it and it broke off the wall. It happened right after Haleigh told him he was really annoying her.  It was a slow night (I’m guessing the maintenance crew is busy tho) but there was a little game talk going on and some other random tidbits. It’s not a sign the house is slowing down because if it’s a week when votes arn’t up in the air, not much goes on between Monday and Thursday. People lying about votes is the story this week, not indecision over how they’re voting. Unless someone has a fight or a secret is spilled, here’s where the votes are:

This may not be another blindside. Haleigh goes back and forth between confident and worried and by Thursday, they may see what’s happening. JC won’t confirm and if Scottie sees the vote isn’t going the way he thinks, he’ll vote out RS too. I don’t think he’ll do it without telling Haleigh and Fessy first though. If things stay as they are, watch for Rockstar and Haleigh’s brief sigh of relief when they hear 5-1 because they think it’s 5-1 now in favor of Rockstar. They are somewhat expecting Fessys vote to be canceled so that shouldn’t shock them. I suppose it could be 4-2 but I don’t look for JC to throw another hinky vote. It’s much harder to hide the lie when you can only blame it on one or two people and those people can confront you. Being confronted face to face is much different than lots of confusion with many possibilities. Tyler’s already let JC know the other side is accusing him behind his back so he knows he’ll get blamed. JC also laid the groundwork to Fessy last night to justify his vote against Rockstar. He didn’t say he was doing it but gave reasons why it might be better for his game. JC is a smart player and I think he knows what he can get away with and what he can’t. I’ve been really impressed with his game so far but he’ll have to make a move soon to avoid being a victim of L6.

Scottie is firmly in Haleigh’s corner at this point. He sees a F3 with Haleigh and Brett of possible. I think if Scottie was lying to her, he’d suggest Fessy as the third but he didn’t so it makes me think this is what he really wants. He and Tyler seem so sincere when they talk but they’re lying to each other. If they aren’t, they’ve tricked me too. I have some early appointments and my dog has to go to the groomer today so the recap won’t be too in depth. (Nothing can mess up your wood floors more than a 70 lb poodle who needs a bath and a haircut! He may not shed but that hair drags everything in from the outdoors.) Here’s some of what happened yesterday:

Have a great Wednesday and I’ll catch up with you guys tonight!

Previous Tuesday Feed Updates – The Denial Is Strong In The Hive
Next Should Brett Make A Big Move This Week? Plus Wednesday Feed Updates
Subscribe
Login
68 Comments
Newest
Oldest Most Voted
Inline Feedbacks
View all comments