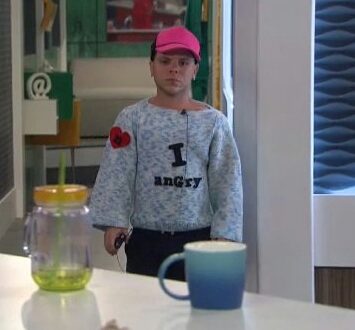 Good morning! This week is dragging along but we’re almost there. We’ll watch Scottie go to the jury tomorrow and move on to the next one. Scottie’s still hoping for a battle back, jury buy back or whatever else people call it.  (I don’t think we’ll have one but who knows?)  We’ll get to see the hide and go seek veto comp tonight and hear the zings although they didn’t sound too great this year from what I could tell. I’m bidding a big job this morning so you won’t have to suffer through my ramblings too much. I’m just getting right to the recap.

Highlights from the day (check Steve’s updates from yesterday for more info):

I have some photos of the other hg’s but I’ll save them for tomorrow because I’m out of time….a girls gotta eat and the groceries ain’t free!  I’ll be here later for Steve’s (hopefully) snarky and sarcastic rundown of tonight’s episode. Ya’ll have a great Wednesday!