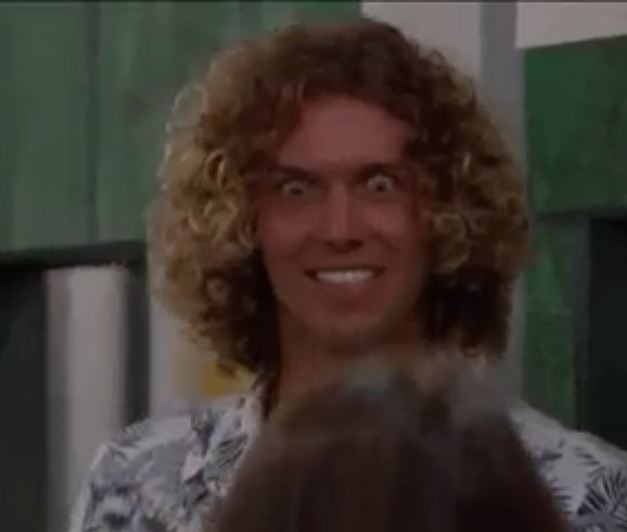 Good morning! Wow, Steve had a slow day to cover yesterday! Scottie finally got the idea to see if people wanted to keep him this week. (super strategic, huh?) Haleigh needed her safety check in with Tyler. (lost count of how may times I’ve heard the same convo) I mentioned in yesterday’s recap people were getting tired of each other on a personal level and there was more of that being talked about too. Most of them are still hiding it but the Sam and Haleigh problem may be getting ready to surface. 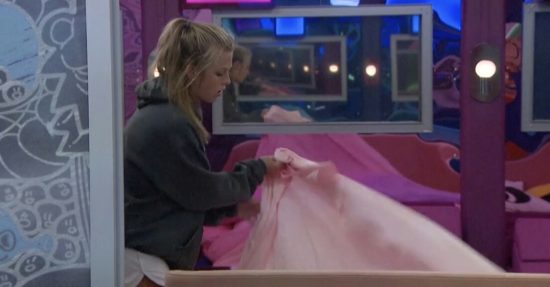 Here’s (somewhat) of an explanation for the mattress topper drama. Sam and Haleigh hate each other. Haleigh’s continued to be mad over Sam cheering for Tyler in the hoh comp. Sam became a have not. Haleigh started sleeping with Kaycee. Kaycee secretly was annoyed Haleigh was sleeping with her since there are plenty of beds. (don’t know if I missed something that got Hay to fix her own bed the other night) Haleigh appeared annoyed that people were already in beds 2 nights ago. She destroyed the bed Sam had made up all nice and neat and usually sleeps in (not now because of have nots) to get to the mattress topper. Haleigh took the topper. Yesterday, Sam saw her bed. Sam took Brett’s topper from his bed and remade her own. (you know, the one she can’t sleep in right now) Brett asked Sam why she did it. Sam said it was because Haleigh took hers. Last night, Haleigh was fixing one of the beds back. It wasn’t for Sam because she laid in it right after. Shortly after that, Haleigh was in bed with Kaycee so hell if I know what’s going on at this point.

Brett was complaining about Sam yesterday and the bed topper was part of it. Haleigh told him she kind of started it. What isn’t being mentioned is Haleigh “kind of” started it the week before when she and Fessy were have-nots. They took more bedding from the bedrooms to use in the have not room. (A lot had already been swiped) She isn’t a have not this week so needs to make other arrangements. I don’t know if this created a bed topper shortage or not. I do know Haleigh calls Sam passive aggressive quite often. She is but Haleigh is too.

There were jokes made yesterday about ways L6 could keep Haleigh and Sam going at each other. Sam said something about straightening Tyler’s hair again so it was suggested Haleigh should do it and beat Sam to it. They brought up Tyler feeding Haleigh while Brett gave her a massage. (I don’t think Hay was there at the time) Later, Haleigh got in on the talk when they said she should clean Sam’s crap off the table since Sam says Haleigh doesn’t do enough around the house. Haleigh thought she should give back Sam’s bed topper and tell her she didn’t need it, she’d just share a bed with Brett. Everyone complains about Sam’s mess on the table which Steve already covered but here’s another pic just because it’s nuts! ALL of this is Sam’s craft stuff. Angela is the one who started saying they found Sam on an episode of Hoarders. 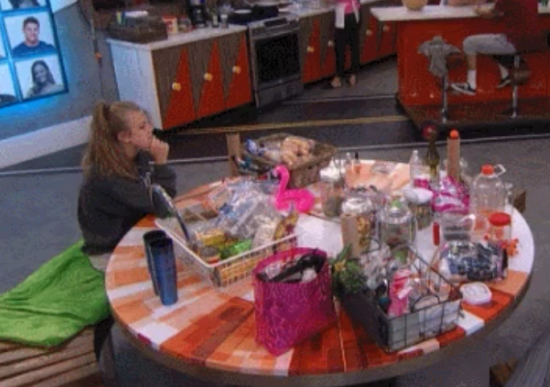 I’ve seen people asking about JC’s cup they think is Tyler’s. I could’ve cleared this up before but I forgot about it. People have plenty of reasons they don’t like JC but this shouldn’t be one of them guys. This is JC’s cup.  A long time ago, JC put the sticker that said “Tyler” on his cup. This happened when they were first joking about Tyler being his boyfriend. Sometime later, JC and Tyler had a fake fight about breaking up so to be funny, JC put a “Brett” sticker on his cup. Tyler took the Brett sticker off of JC’s cup, made a joke and replaced it with his own again. The “Tyler” sticker has been there ever since Tyler put it back on. 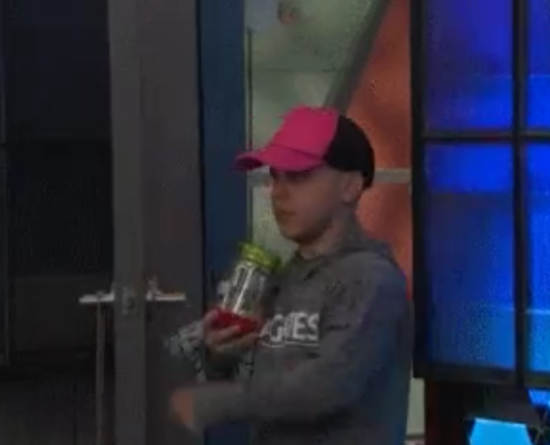 Sam tried to get Angela to let her shave her face. Sam said it was good for exfoliation and getting rid of dead skin. Angela said hell no but here’s Sam trying to sell Angela on the idea: 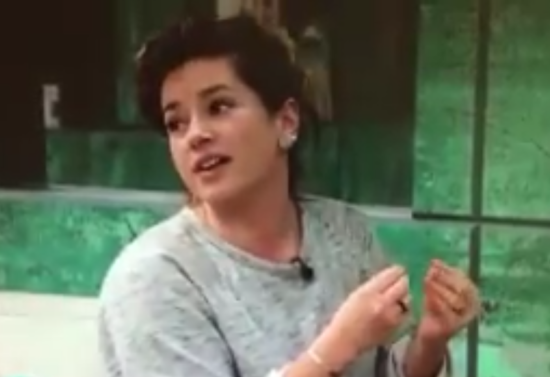 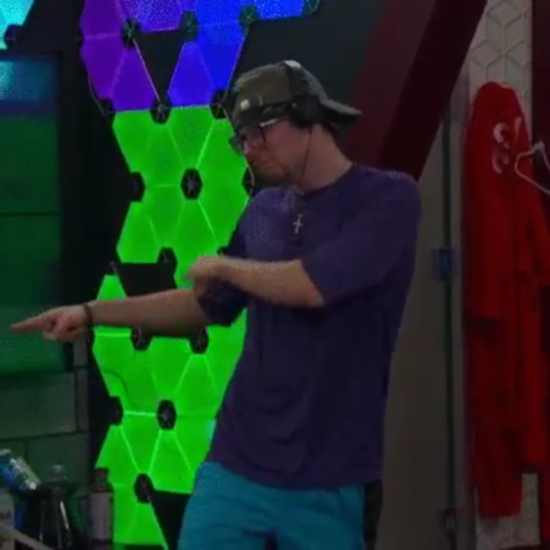 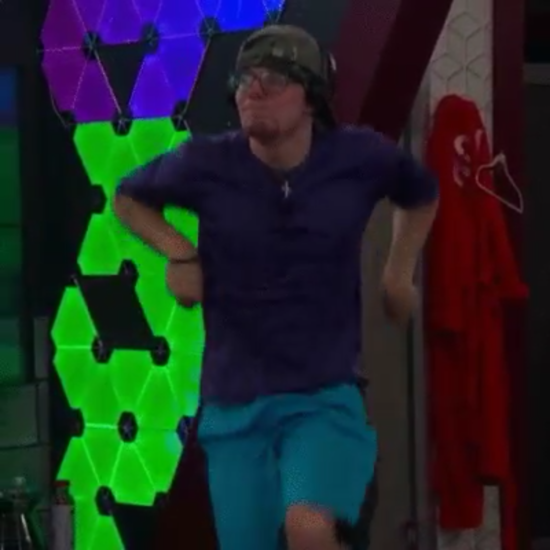 Tyler and Angela talked about Haleigh vs Scottie for tomorrows eviction. They’re banking on Haleigh putting up Sam with only one of them so they’ll control the votes. This is the main reason Scottie’s going home. They don’t know who he’d put up and he has an overall better comp record than Haleigh. (He came in 2nd in quite a few) I’ve gone back and forth but I’m convinced Haleigh would ‘Foutte it up’ if she won and actually go after Sam. Maybe it could change if JC got in her ear but I don’t know. I think it would be funny if she put Tyler & Angela otb after they keep her tho.

JC & Sam talked in the have not room. He was saying he’d like to do something important with his life one day and Sam told him being on the show was big. He kept trying to get her to see he wasn’t talking about something like a tv show where he was trying to make people laugh. She was being very kind, supportive and giving him a pep talk. I can respect that about her but he was saying “this is just a game” and she kept saying that it wasn’t. I kept wishing she would stop talking and listen. It IS a game and that’s what they’re there to do, not “make one persons day better” and all the other crap she says. Yeah, she doesn’t want to go otb and is sort of playing (finally) but I don’t care. There’s 3 weeks left so I’m not giving her an award for it.

Random for the other night. It’s Brett imitating walking like a pregnant lady: 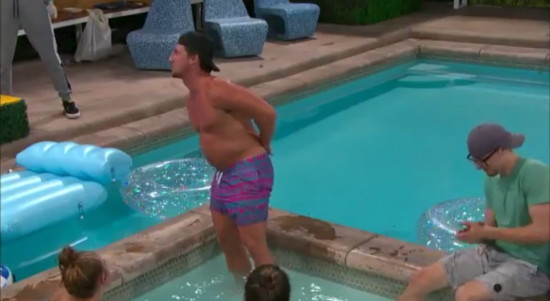 Sam told several ideas she had for what she wanted when she died. One of them (from when she was a child) was  she wanted her ashes mixed with plastic and turned into a Barbie so she could finally be a Barbie doll. (What company would even do that?)

Sam got in on the dance action too: 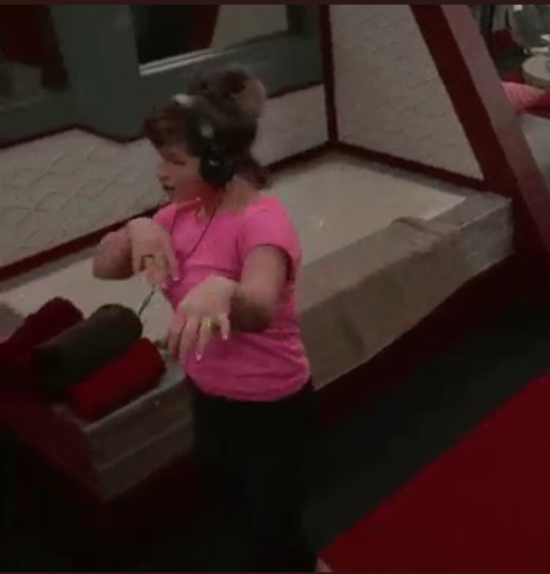 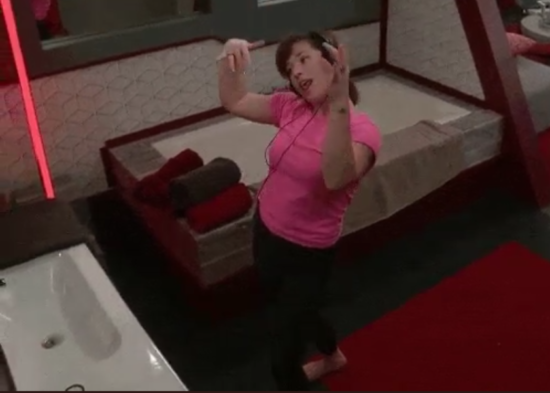 Scottie talked to JC and told him Fessy and Haleigh blamed him for Scottie going otb. JC played dumb and said he had nothing to do with it. Scottie told about all Haleigh’s F2’s. He said Tyler told him he was a pawn but he was starting to work on votes.

JC and Scottie had a peanut butter and shaving cream fight.: 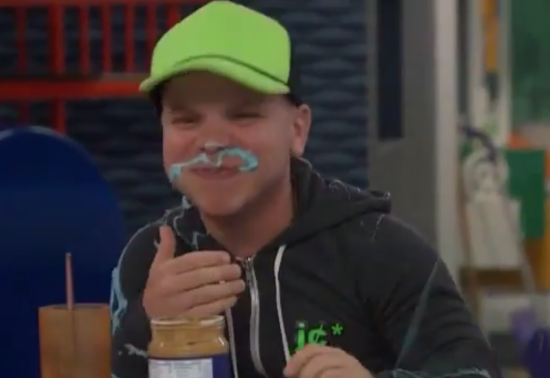 L6 is shocked Scottie feels so safe. Tyler said it might be time for another L6 blindside and said they hadn’t had one in a while. Angela said “it’s what we’re good at.” Tyler thinks he did too good a job making Scottie feel ok with going otb. (I don’t know what Tylers plan is this week. It’s a mistake if he doesn’t explain something at least in his goodbye msg. unless he’s going to act like the house flipped the vote. No idea??)

Sam schooled JC on the word “literally” and how he’s using it too much and using it incorrectly. She’s right and everyone’s picked it up from Haleigh. Sam gave Scottie a lecture on it shortly before he was evicted. Sam and Haleigh are even at odds on the English language!

Scottie finally spoke to Tyler in the hoh room last night. I know people shouldn’t panic when they’re otb but this is ridiculous!  How can someone as hyper as Scottie barely have a pulse with his game?  He said he felt good about Angela & KC.  Tyler asked if he had spoken to them yet and Scottie said no. Tyler said he hadn’t either because he couldn’t get Haleigh out of the HOH room long enough. Scottie said RS & Bay didn’t like Tyler, they just hate Angela and Brett more.  Scottie spilled everything he possibly could, the same way he did with Brett and everyone else. I don’t think Tyler has any intention of keeping him but he was able to get some info out of Scottie and give him a little bit that maybe he thinks would help with the jury. The best part was Scottie explaining to Tyler why Kaitlyn made the move against Swaggy! (Ummm, ok Scottie, glad you got that cleared up) Tyler can’t take credit for things now because Scottie could bust him in his speech on Thursday. 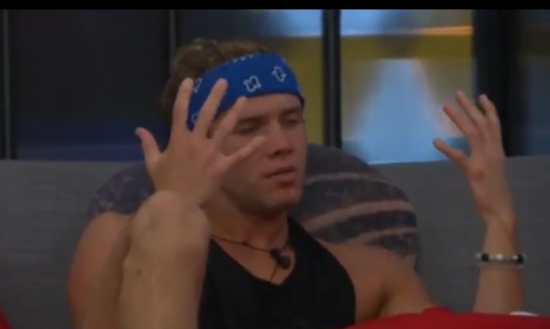 Haleigh questioned Tyler AGAIN. She wanted to know why Scottie was told he was a pawn but she wasn’t. Tyler said he didn’t say that to Scottie. There was more “it will be fine” from Tyler and “I hope you will trust me now” from Haleigh.  (I don’t get why Tyler or Angela doesn’t simply ask Hay who she would put up with Sam if she won. Sure, she could lie but they could at least observe if she hesitates or if it sounds like bs) Scottie is better for Tyler to keep imo but I’m out here and he’s not so I get why he doesn’t see it. (sort of, she did put him otb)

Angela and Brett finally did a little game talking. She’s been saying L6 needed to have a meeting to make sure they all still felt secure. (I think if she and Tyler would get out of the damn bed, they wouldn’t need a meeting to begin with. The fact that she has to move when someone comes in the hoh room should tell them both they shouldn’t be doing it. It’s sloppy and Angela’s probably the one who’ll pay for it, not Tyler) They agree Tyler and KC are liked much more than the two of them. They talked about Rockstar hating them and Brett reminded her that she was still his favorite. (He hasn’t said that in a while because they’ve both been annoyed with each other) Angela made a comment about Rockstar having to vote for one of them if they were in the F2 together. It wasn’t any sort of a deal but it could be the start of one to come. Angela said she wasn’t going to worry about jury votes. I’ve liked ice queen Angela but I’d like to see a smart ice queen. This is a bad way to play unless she’s banking on people wanting to take her to the end. After Scotties big mouth, they may be.

It was a late night for Sam. She held court (loudly) in the have not room with some of the guys. People were trying to sleep so mark one more reason that Sam’s on everyone’s shit list. 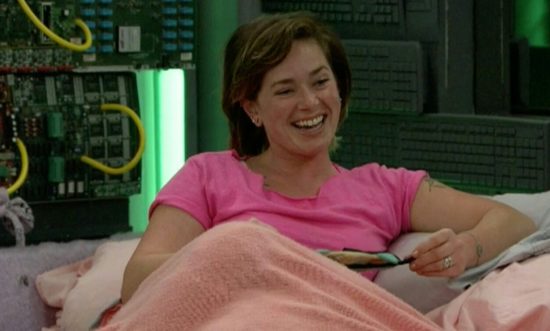 I’d expect the really bad campaigning from Scottie and Haleigh to continue today. Let’s face it, little of what either of them says will determine what happens this week. It comes down to the gut feelings L6 has about which one of them will only put one L6 member otb if the win Thursdays hoh. Have a great Wednesday!