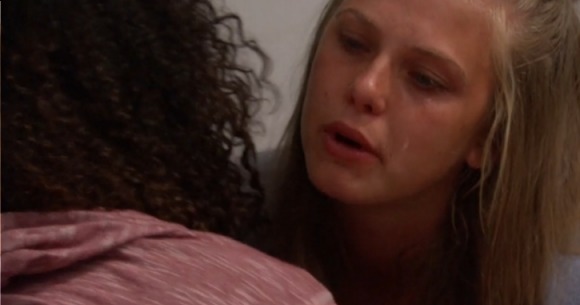 Good morning! The houseguests had the backyard yesterday which always makes them more relaxed. KC was able to get in the pool and Sam hung out in her smokers corner with the craft supplies. Instead of scrambling to stay in the game, it seems some of them are in a race to see who can toss theirs in the garbage first. It was a tight race between Baleigh and RS most of the day but not wanting to be left out, Haleigh came pulling up from the rear. As Steve said last night, we waited most of the evening for a house meeting that hasn’t happened yet. We may get it later today.  I’ll go over the highlights of what did happen:

I’m not really against Foutte/Hive and truthfully, they’ve given me a lot of entertainment. Originally, I kind of cheered for them because they were the underdogs. Now, I just want to see if they can keep getting blindsided every week. Watching this shit show of an alliance is hilarious! (Yes, I’m one of those people who laughs when I see somebody slip and fall down, can’t help it) Bayleigh had a power but told the other side of the house. It was a huge mistake and she’s paying for it. RS may consider ruining what little is left of her game for “social injustice.” She can’t make them vote her out and they probably won’t but any progress she made this week will be gone. Fessy never knows what’s going on and even though it was cocky for JC to say “I’m Fessys brain,” it’s true.

Haleigh gets her own paragraph because she’s done everything wrong since the week began. She has one shared problem with everyone in her alliance. They don’t trust each other because someone always flips the vote on them. They never considered that Tyler did it until it was too late and they still don’t ever think its JC.  JC isn’t in the alliance so why don’t they think of him first? Whether she had time to tell her group about winning the hacker comp or not, she still screwed it up. She’s mentioned Tyler going up for a while and except for RS, could never get anyone on board. She knew this when she put him on the block. It’s similar to when Cody put Paul up and just assumed people would want to evict him once he was sitting there. Haleigh had to be screaming inside watching all the outrage from most of the house when Tyler went up but what did she expect? She did it without considering if she had the numbers. The next bad move was removing Scottie. She had him in her pocket, got him blamed for being the hacker and then spent 2 days trying to get him back on the block and evicted this week. She’s lost his trust when they desperately need numbers. She topped it off by choosing KC to play in the veto, someone she has no relationship with. I would say she’d lose RS once she finds out but she doesn’t have anywhere else to go because of her own game play. She tops it off by letting guilt make her come clean and probably ruin her game in the process. If she had any feel for what’s going on, she’d see they don’t have Scottie anymore, the power app is the real reason Bay is leaving, she never had Angela on board and nothing will save Bay this week. She was positioned the best of the people in her group and she blew it. I’m disappointed because her focus on the game instead of Fessy gave me hope for her as a player. Everyone knows the game she’s playing but she still doesn’t know theirs. She really needs to win to get out of this and hope the double shakes things up. She should’ve never told Bay but once she did, I agree with Fessy. I think the only option is to own the decision, point out how Tyler has everyone and hope like he’ll it gets other people in the house thinking. After that, her side needs the hoh and the hacker win this week. They don’t have numbers anymore so fighting it out and hoping for a little luck is what they have left. It’s a bad plan but it’s all she’s got imo. Everyone knows how much she walked around swearing she didn’t win the comp so she’ll have zero credibility to make deals with people. Who’s going to trust her? I think the worst thing she could do is cry, apologize and walk around dad and depressed. She’ll just be waiting to be picked off if she does. We’ll have to wait around today to see if the house meeting happens.