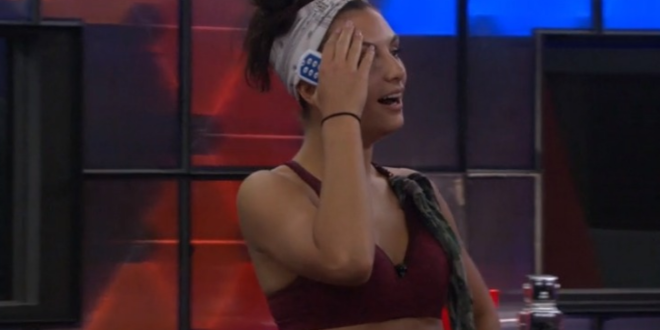 After what feels like the longest week in Big Brother history, we’ve finally reached Thursday and the first eviction night of the season!  Who will go between Sam or Steve? This one is going to be a tough decision that was made even harder by Tyler’s reveal last night.

Around midnight, Tyler (watch on live feeds here) finally revealed to his alliance that Sam has the power. They were blown away that she was given it and were still convinced JC had it up until the last moment. The group hugged Tyler and thanked him for telling them, but I have a feeling him keeping that secret for so long is not going to sit well with some of them in the long run. Tyler basically just sealed his position as 5th or 6th in the alliance by keeping that secret, but more on that in coming weeks.

What this does mean is that the group is almost certainly going to vote to evict Steve because they still don’t know what the power is and obviously want to try to get Sam on their side even if their efforts are futile tonight. I know Winston and Brett were discussing just giving up and voting with the house to keep their cards close to their chest for a week, but this has to guarantee a split vote tonight. It has to. Level 6 know they’re outnumbered and have to do something to earn that key 8th person (if you count JC) in their group.

They likely still won’t have the numbers to actually keep Sam straight out which means the power should be flushed, their alliance exposed, and a very pissed off Steve along with the other side. Furthermore, there is only a chance Sam returns to the house so they still won’t even have the numbers as she almost certainly should be leaving the house for a few weeks.  Battle lines should be drawn tonight, and unless something gets leaked throughout the day, I fully expect a very tense night after the live show which will only be intensified depending on who wins HoH.

I’ll keep an eye on the feeds and see if anything happens, but with tonight being the first live show of the season, I expect a lot of downtime on the feeds with them prepping for the show. Either way, be sure to tune in tonight because it may be a fun one!