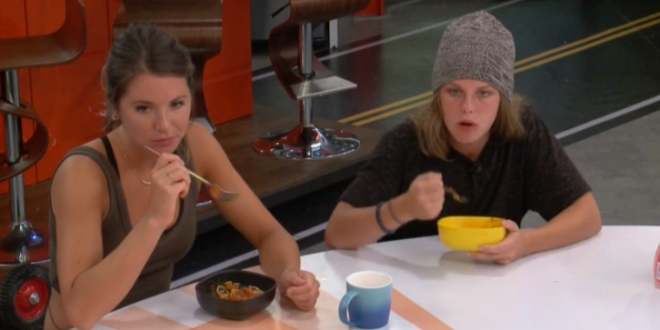 It’s the night before eviction and what a weird week it’s been considering it was supposed to be a “dead” week due to the power. You have Sam doing her Sam things, a weird love triangle, and someone just demanding they not be on the block – and it working!

The love triangle is a weird one. Kaitlyn loves Fessy (she told him), while Fessy has a major crush on Haleigh. Haleigh seems to kind of like Fessy in return but hasn’t really shown as much interest in him other than occasional flirting. That’s why it was weird for Sam to call Haleigh out like she did during nominations, but like I said, Sam does Sam things. She really doesn’t seem to have any reason for the moves she makes, and her edit was fairly accurate in showing that. Having JC just tell her not to nominate him and it working was just bananas. I mean it’s actually a decent move if people were on board with it, but putting someone up as a pawn without letting a soul know what you’re doing is a good way to make enemies in the house. The fact that she considered nominating him was bad enough, but once you do it, you have to go through with it otherwise you just made an enemy for no reason.

You’re probably wondering what has happened since the veto ceremony (if you don’t follow this blog daily) and if you’re here looking for spoilers, you’re in the right place! Rockstar has been campaigning as best she can, and her weapon of choice is to paint herself as a weak player who just wants to make jury. Meanwhile, Kaitlyn has been Kaitlyn and all over the place. She has roughly half the house on her side and even allegedly messed around with Brett’s junk while he slept yesterday morning (allegedly because it was under the sheets but it sure as shit looked like it). She has also been working Fessy and of course Tyler and trying to be cool with the rest of the girls. The house has gone back and forth on who will be evicted and while the house is divided, I expect most to finalize one person and it ending up being a landslide vote. Probably not unanimous, but close.

Here are some updates!