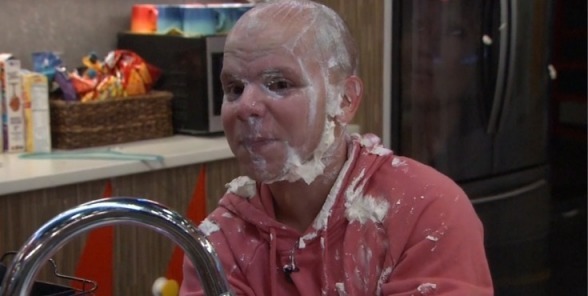 I didn’t bother live blogging the episode tonight because I already had the results so it was basically just another episode.

Quick recap from it – I loved JC’s eviction speech. Him winning HoH was the best thing to happen to the last month of this season. Whether people like it or not, the last month has been boring as hell and watching L6 dominate their way to the final 3 was getting old. JC may not win the season, but this will at least spice up the next week or at the very least the next episode. Having Kaycee choose between Angela and Tyler is going to be a huge moment for Big Brother 20 and that will happen if JC or Kaycee won the veto tonight.

Kaycee won the veto yet again. This is the 5th win out of the last 6 veto competitions and between that and what she says when she is forced to evict her ally could be worth $500,000.  I say ‘what she says’ because if she stands up there tomorrow night and gives some lame ass speech (I honestly can’t even think of an example of one right now) then she may lose jury votes. Either way, 2/3 of the final 3 is set and that is JC, Kaycee, and the third will be either Tyler or Angela (for reference, I predicted that final 3 recently – Don’t look at the order of the rest. I bombed there)

You’re probably wondering how this works now that Kaycee won the veto. Is there a special loophole that breaks the system if the person not sitting on the block wins?  No. She simply can’t actually use it to save anyone as there is nobody to replace with so Kaycee will just cast the vote that evicts a person. Of course, you can always pretend there is some rule where a person is saved leaving only one on the block which is an auto-eviction if you want to go some crazy roundabout way. Either way, Kaycee is the sole vote tomorrow between Angela and Tyler.

This also leaves the house in an interesting situation because there are not many competitions that JC can win, but an endurance comp is one of them. This means he actually has a chance to win in the first round of the HoH which will automatically bring him to the third round in a competition style he proved he can win with his last HoH.

Put it simply – JC needs to win round 1 of the HoH competition or Kaycee and either Tyler or Angela will be in the final 2. It’s very unlikely he’ll have a chance in round 2.