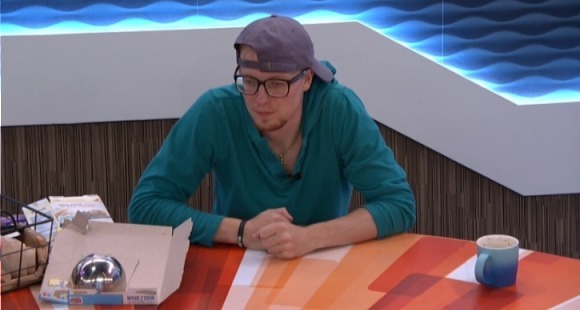 Good morning everyone! I hope you got caught up on yesterdays action in the house. If you missed it, you can check the threads Steve posted yesterday and read about the messy house meeting. It happened on my way home from work and I had just enough time to go back and watch it before going out to dinner for my sons B-day. (I met the new gf too) Once they left town, I was able to catch up on the the things I’d missed. Steve covered the meeting so I’ll just say…Wow! I was trying to remember the last time I saw a meltdown that big on the show. I’ve never seen anyone get so mad, they started chewing on their own face!

I liked the drama but it would’ve been better for the players’ games and sanity if they’d realized there was a huge communication gap. Bayleigh was ridiculous to go off that way. Because of her screaming combined with no one getting what the other was saying, she was never getting the apology she thinks she deserved. I mentioned the other day (but it may have been in a comments instead of my recap) that I wish Angela hadn’t focused on the hacker twist in her veto speech because it would allow Bayleigh to play the role of victim. After watching the episode, it came off the way I thought it would. Bayleigh wants an apology for being accused of being the hacker and that’s why she was so mad. If Angela had focused on Bayleigh having a power app in the speech, Bayleigh wouldn’t have been able to be the victim as much. We wouldn’t have gotten the house meeting but I’m talking about what’s good for them at the moment, not us. Level 6 said themselves it was irrelevant if she was the hacker so why focus on it?  Tyler and Angela are sending the first person to jury VERY upset with them and it was unnecessary. Don’t get me wrong, Bay was always going to be pissed but she didn’t have to have this level of bitterness. It was fun for us but not a smart game move for them. Brett, on the other hand is working for those votes. He consoled Bay after it was over, RS was hugging him and telling him she liked him now and he even baked the ladies cookies.

One side of the house is definitely playing better than the other but L6 makes mistakes too. Most of them still don’t think Haleigh was the hacker this week. Everyone on both sides is starting to play for themselves and make side deals so there’s still alot going on. I’d been concerned if one side demolished the other, this great season could start to slow down. It doesn’t look that way because they’re still playing hard and all the side deals really coming out too. Last night, we thought there would ba a halfway party with alcohol but the Vegas leaker said the alcohol was canceled because of yesterdays events. I don’t  have any drunk antics to recap but here’s what did happen:

Tyler knows his game is more exposed than it’s been before and he may also be regretting switching roles with Brett. Brett’s showing signs of playing his own game although I think he’s still very loyal to L6. Haleigh is scrambling to put something back together and Scottie may be the way she does it. Scottie isn’t loyal to L6 or Hive but I do think he’s somewhat loyal to Haleigh. He definitely has a soft spot for her.  It should be another great week ahead. I can’t wait for tonight! Have a great Thursday!