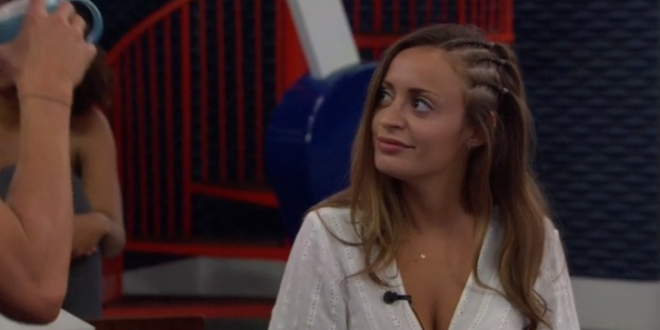 Good mornimg everyone! Before I recap, I have to talk about Wednesdays episode. It was terrific! We don’t get many BB firsts but someone preventing themselves from going on the block during the veto ceremony has never happened and I loved it. Sam seemed flustered and annoyed by it so I don’t believe what she told JC afterwards. (She said she was never going to nominate him but was softening the blow for Rockstar which doesn’t make any sense) I think in her unique way of viewing the game, she thought it was almost a reward to go up the week her app will be used. It was like “this shit’s so great, I’m gonna give it to my best friend too.”  I also have to give CBS props because it’s obvious they are invested in Sam (they always have a few picks who get a great edit) but they still gave her a fairly accurate edit. They could have made her look much worse but they at least showed Sam’s other side. Hayleigh got a bad edit and they should’ve shown her putting Fessy in his place when he tried to trade a veto for romance. I was glad the tv only viewers had to listen to Kaitlyns baby voice. (We have to suffer it all day so they should at least get a taste) I wonder what the tv only viewers would think of Sams “proper lady” remarks if they knew she was making weiner wine and saying “I’ll stomp a mud hole in that bitches chest” when talking about Kaitlyn. (Yes, she said that to Tyler yesterday evening) Fessy could have gotten a worse edit too. They made him look like a selfish jerk and liar but he could have been made to look like a stalker if they wanted.

Yesterday was a rollercoaster and not the kind Fessy offered to Kaitlyn in code a couple weeks ago. I did the recap before work thinking it might be a close vote with Kaitlyn staying. I cam home from work to everyone flipping to evict Kaitlyn. By evening, it was going to be close again. I’ll go over some things that happened yesterday and as of now, Kaitlyn should be evicted but we still have today so anything could happen.  I love it, we don’t know who’s being evicted in a week that it doesn’t even matter!

Some feed watchers were trying to give the vote flip credit to a particular person yesterday (usually their fave) but I don’t see it that way. It was a domino effect and many people were involved.  I’m going to recap the way I did the other day, by going through what each player did and their influence on the day. Kaitlyn and Rockstar looked as if they were in a contest to see which one could get evicted faster. They did nothing to help themselves and it was pretty funny.

Part of the reason level 6 keeps flipping is because they want a split vote. This created a situation where an entire house is going around trying to make sure they’re all on the same page with a unanimous vote. At the same time, part of the house is trying to prevent it. Level 6 does work to make sure they have the votes to evict Kaitlyn but then once they get them, they’re tempted to flip it again so they can leave Hay, Scottie and Fessy on the wrong side of the vote. It’s like a kid who always wants the toy another kid is playing with even if they’re already holding one in each hand. This post has gone long (sorry) so I’ll just mention a few random things and wrap it up. I’ll  save the other tidbits for another day.

Fessy announced he’s realized that people watch the feed so they can get clues for what’s going to happen on the episode. (we’ve mentioned he’s pretty, right?)

Fessy had a talk with Hay and Rachel and told them the things Kaitlyn said to him during the first week. We’ve already gone over this stuff about him being her soulmate, having feelings for him and how she wanted to boink him. He said she’s told these things to Tyler too. He still wants to talk to Tyler about it today so we’ll see. This isn’t news but they think it would be a great idea to call her out on it today. (Did they for get she may not be evicted?) Brett has mentioned wanting to call out Hay over her plan to evict Kaitlyn.  I do not understand the motivation for this but I’m here for it if it happens.

Bayleigh asked Brett if he knew any famous people. He said he knew and was friends with a couple NBA players. She shot this down, wasn’t interested and said she wanted to know about actors/actresses. (Look Bay, I like you but stop feed blocking the shit I’d like to know! Not all of us get our news from or care about Entertainment Tonight. Some of us get our news from ESPN and inquiring minds want to know!)

For anyone who cares, Mark and Elena broke up. I’m not one of those people but thought I’d pass it along just the same.