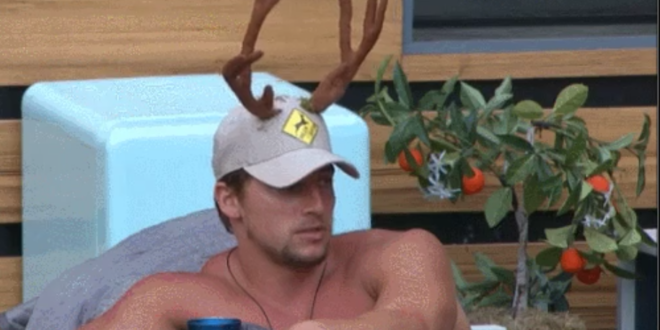 Good morning! The top picture is a few days old but I forgot to use it so I thought I’d stick it up there today. It made me think if Brett and JC had been “the bros” from the beginning, it could’ve been some funny clips. (Sorry Winstonbro, you simply weren’t funny) They’re both hilarious on their own so I’m not complaining about a lack of comedy. I think things will pick up again once Scottie leaves and we should see some scrambling no matter who wins the next hoh. Unless Fessy falls on his sword for Haleigh or Sam decides to self evict, I think everyone will fight hard to stay. (I could see Fessy trying to stay so Haleigh isn’t left in the house with Brett) Scottie gave it a try too but his strategy was bad and he did everything too late. I know I keep saying how great this season is and people are probably tired of hearing it…but it is! I can’t remember a time when I didn’t care who won the hoh with 8 people still in the house.  As Steve mentioned yesterday, it was another slow day so I’ll just recap some of the highlights and add a few more pictures I’ve recently ran across.

A few things from during the day (check yesterdays threads for more details):

Later in the night:

It was leaked that that he hoh comp will be a ball rolling comp. I can’t remember the exact wording but it didn’t sound like a complete crap shoot comp. It sounded to me like it might be the one Paul won in season 19 and hosted in OTT where you have to roll the ball down the crooked plank and get it into the little box. I think it had a Candy Crush theme last year. That may not be it and this is only a guess.

Kaitlyn was on the RHAP podcast last night. (by phone) She still says some crazy stuff about Grandpa Lou and her spirit guides but she’s actually the least bitter of the evicted hg’s. She’s having fun with it, she’s willing to laugh at herself and she’ll probably end up with more fans because of it. She said she had some damage control to do, admitted she made some mistakes and said she needed to learn from them. She didn’t like the manipulation from Tyler on a personal level because she thought everything was sincere at the time but she respects his game. She thinks he’s doing a great job and she’s still rooting for him. She’s also rooting for Brett and JC because she feels like they’ve really stepped up their games and she’s impressed by them. She said Sam always used to look at her like she wanted to punch her in the face and she could never understand why. She thinks Sam is a sweet and sensitive person out of the house but the stress in the house is making things worse for her. She had opinions on other things too and it was an entertaining podcast. It was funnier because Taryn Armstrong (who does the morning update among other podcasts) has talked a lot about being afraid of Kaitlyn and saying she’s crazy. It’s been a running joke all season so having her on with Rob AND Taryn last night was great.

I’m very ready for tonight to happen so I’ll catch up with Steve and all you guys back here this evening. Have a great Thursday!