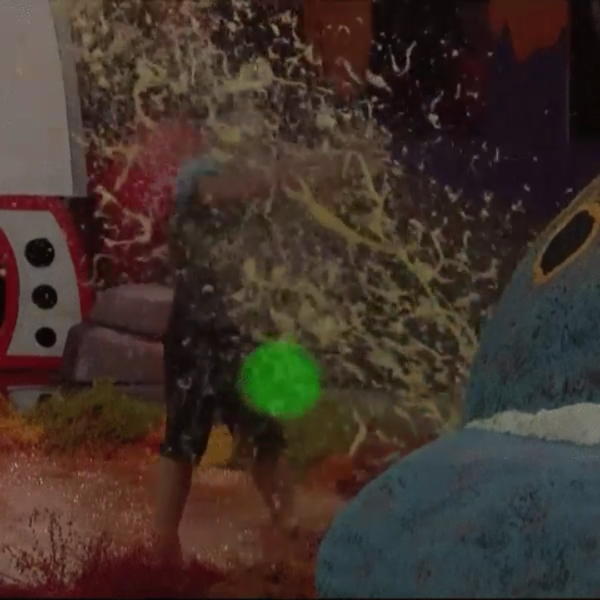 Good morning! It’s finally Thursday and with no campaigning going on, it feels like forever since we’ve had an eviction. Tonight, we’ll see that plus a juror return or the start of the comp to determine who returns. It was leaked yesterday the comp will be the one where they spin in the air on ropes with some type of small platform for their feet. I’m going to assume for now that the leak is true and also assume the battle back and hoh comp will be combined like it was in the past.

In season 17, Johnny Mac was the returning juror and it came down to Vanessa and him with Vanessa winning the hoh. In season 18, it was Natalie and Victor. Victor won the comp and I can still hear Natalie begging Victor to “let” her win. It would seem Scottie has the best chance out of the jury to win this one.  I think he won bowl-a-Rina this season which also involves spinning. Smaller people usually do better but since Victor won it, we can’t count anyone out. The spinning has to be factored in as well because someone with small feet and not too much body weight could also have a hard time and throw up when they get dizzy.  I think the hoh winner could be almost anyone and I could see most of them doing well. We’ll know soon enough. Until then, let’s go over yesterday.

Early in the day:

Bedroom News: The night before, Tyler and JC slept together. JC kissed Tyler’s armpit in the middle of the night and massaged his arm. A lot of people were creeped out. Some sources were saying Tyler had been assaulted in his sleep. It wasn’t that serious. Bizarre…yes. assault…no. He wasn’t massaging Tyler’s face. (which was also reported) He was fixing his eye shades they use to keep the light out. JC is a bed hog, a close sleeper and hot to sleep with. He also has a lot of gas. Those are the reasons Tyler doesn’t like sleeping with him. ALL these people are very touchy, feely and snuggle when they sleep. (I’ve said before, it would drive me batshit crazy! Except for grandbabies who are also bed hogs, I need my personal space, period) Does anyone remember Frankie and Zach from bb16? This situation wasn’t an assault on Tyler in his sleep and it looked innocent enough to me. If JC weren’t gay, people wouldn’t have such an issue with it imo. It was leaked that Tyler was asked about it in the DR and he had no problem with it. It also wasn’t a secret JC was trying to keep the next morning. They joked and Tyler knew about it.  (There are enough beds for everyone now but they’ve talked about the have nots taking most of the comforters. The house is also known to be cold all the time. That’s the reason most of them sleep together, along with the habit of doing it. I’ve also heard hg’s talk about missing a connection to people because they’re shut up for so long) Fessy recently told Tyler he could see over the showers. Where was the outrage when he proudly made that announcement?  I think this was blown out of proportion but wait, there’s more JC trouble to follow…

This was around the time the episode came one. I only have a few comments about it. Angela having to call Haleigh and Fessy “a power couple” in the DR was cringe worthy when you know what’s really going on in the house. The veto comp was cool but the first round was bad. Not only was it almost impossible to catch the balls, they had to light them up to even see them. I thought the segment of Fessy & Haleigh going over how bad their games were and being able to laugh about it was really cute.

This was close to the part of the night JC decided to pull a prank on Haleigh. (I get things a little out of order. I’m not a time stamp kind of recapper, sorry! ) (editors note: it was 10:59 pm) He opened the bathroom door on her while she was, I guess peeing. Thankfully, with the camera angles at the time, these are the kind of shots we saw: 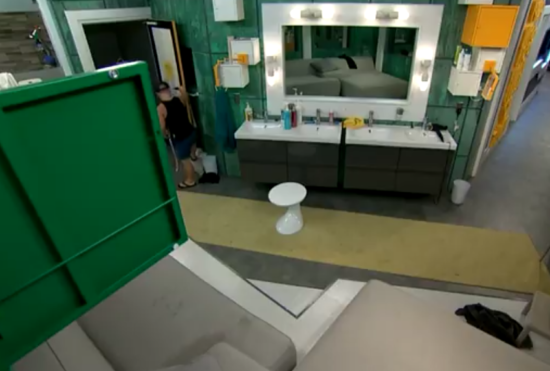 Haleigh yelled at him, laughed and then she yelled “production.” I’m specifically pointing out that she laughed because there are some people who think this meant she must have been okay with it. I completely disagree and I know a lot of people, including myself who’ve  laughed in situations that made them nervous or uncomfortable so that means nothing imo. I also understand that if you’re sitting on a toilet and have your shirt on, none of your intimate body parts will be seen but should that matter? Who wants to be shown on the toilet? He made the situation worse by trying to tie the door open. Production did cut to feeds when she asked so that was good. Sam came to her rescue and was irritated with JC. This pissed off JC because he said he was tired of her yelling at him whenever he was trying to play a prank. Sam wasn’t having any of it and defended herself. Afterward, Haleigh thanked Sam. You guys know that I’ve always liked JC but if he opened the door on me while I was trying to pee, I’d punch him in the damn face.

I said from the beginning of the season he has a different comfort level than some people because of the people he’s with in his regular life. I’m not saying it’s a bad thing that he’s sort of a club kid who hangs with a very “free-spirited” crowd for lack of a better way to describe it. He’s said this himself so I’m not stereotyping JC in any way. Having said that, he isn’t living in the house with that group of friends so he needs to be the one to adjust his behavior. I’m only saying this to point out that I don’t think he’s trying to be malicious, I just think he has a different standard of what is acceptable behavior and what isn’t. He got called to the DR and hopefully they laid into him pretty heavily. For now, he’s mad at Sam and thinks Haleigh overreacted. We’ve seen in the past how JC has a very hard time apologizing or admitting when he’s wrong. His normal reaction is to get mad at the person who’s calling him out on something. This situation is over in the house but for the fans, I think he lost quite a few yesterday.

Here’s a sneak peek of tonight’s comp. This could be two seperate comps. It looks like it could be the one with the balls that have to be dropped in tubes from above. Maybe the jurors do that part and have the swinging one after. We’ll have to wait to know for sure but here’s a shot of the set up…you can speculate too!

I’ll see you all back here tonight. I’m ready for things to get exciting again. Have a great Thursday!