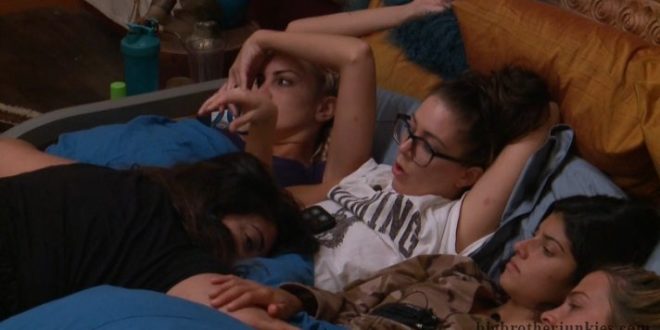 I don’t even know where to begin today. You have Jackson rubbing deodorant on his taint, havenots ending early for god knows what reason, the 6shooters controlling the game another week, Kat scared of Jackson, everyone annoyed at Jackson, but Nick and Sam are the targets this week. The one person I was most rooting for last night (Nicole) was able to stay on the ropes a grand total of 10 or so minutes while the 2 remaining players hung around for about 30 minutes more than they should have because Jackson was yelling at Holly to not make a deal with Sis. What am I watching?

This season is going to rank up there as the worst cast assembled of all time. I’m not sure it will pass 19 or 15, but it’s up there. These are some absolutely terrible players who are being led by Christie – another bad player. Just a bit less bad than the rest? Jessica, Nicole, Cliff, Nick, and Sam are now dead in the water, especially when they lose one of their stronger competitors this next week (Nick or Sam). It’s not like it matters because they’re so clueless that only 2 (Sam and Nick) are even trying to pull their little liferafts together to form a stronger raft but the rest are just content floating around like it’s a summer day in a backyard pool.

As I mentioned above, Sam and Nick are likely the nominees today because they’re the only 2 still working together. The house is well aware of that and by the rest of the floaters not even trying, it doesn’t even give them a chance to pull something slick. They originally thought of putting Nick up with a pawn but realized that Sam can win veto and save both. Seeing as the rest are useless, you may as well put them up together and just evict the one who is still on the block come next Thursday. Pretty simple week. Sam’s vote to evict spoke volumes last night. He wasn’t sad about Bella leaving as much as he was sad that his chance of winning is done. That was a guy admitting defeat. It was sad to see.

Enough bitching, here are some updates