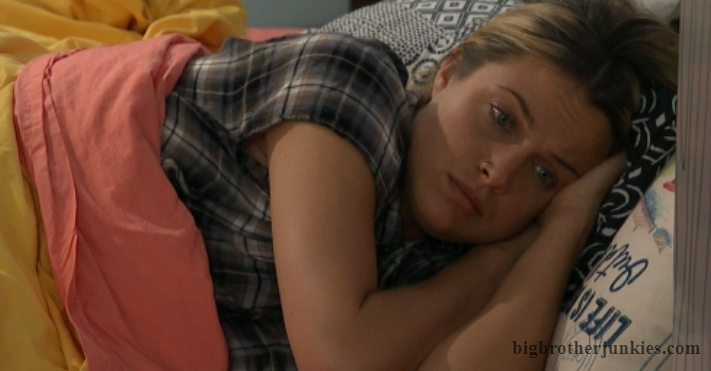 It’s Friday night and a holiday weekend, so I hope nobody is actually reading this because you’re all out enjoying the last bits of summer there is.

Despite the holiday outside, the game still goes on inside the Big Brother house and that game is just weird, man. I don’t know how else to say it. This season has been weird. A lot of weird moves. A lot of dumb decisions. And the cluelessness of these people is just simply mind-blowing. We’re a few days away from September and these people have yet to get a grip on how close Tommy and Christie are! They know each other outside the house and even nearly let it slip when they said they live 3 exits from each other.

To be fair, I believe a lot of this goes back to the brilliant gameplay that Christie and Tommy are playing. Tommy was the guy who pushed Holly and Kat knowing each other from outside the house and pushed it hard. What that did was make the house look in that direction rather than in his because why would someone holding a secret like that blame someone else of the same thing? It’s brilliant whether intentional or not. You didn’t see Bronte run around and accuse people of being the ‘secret nerd’ of the house (seriously, did she think that was a thing?). Seriously though, even Morgan and Alex from BBOTT couldn’t hold the secret all season. That’s because unlike Bronte’s amazing ‘secret’, this is actually super-powered and likely would have resulted in one or both evicted by now.

So here we have it, Jackson is going after Jessica because he legitimately believes she’s closer to Christie than Tommy is and that is Christie’s #1. Of course, he could just go after Christie or Tommy but why do that? It makes too much sense to actually go after your threats. You need to play 4D chess like Jackson does by systematically eliminating the allies of your biggest opponent even though you had multiple chances to just get her out directly. It makes so much sense to get rid of someone who could be the perfect 3rd wheel in the final 3 (Jessica) because you know you have a very good shot at beating her in either first two rounds of the final HoH. If I’m going to the final 3, I’m taking the person I want to sit with and someone like Jessica or Cliff. Two people who have zero shot at winning those highly athletic competitions. Now, obviously Jackson does want to take Cliff but he’s not a guarantee to be there at that point. May as well have a backup in Jessica.

On the feeds tonight, Holly and Jackson began having a lovers spat because she suggested having one-on-one interview segments with each of the remaining houseguests because she thinks that will get airtime. She wants us to actually get to know the people inside the house by staging softball questions at each person to reveal stuff we likely already know (I really don’t think she knows how much people watch these feeds). Anyway, as she was pitching that, Jackson jumped in and asked why she’d do it on a friday night holiday weekend when nobody would be around to watch it. This pissed off Holly because she felt he was mocking her (he kind of was, but he was just being Jackson). They began having a spat when the feeds switched. I guess we’re not allowed to see them fight. Maybe Jackson’s mother got on the phone with her lawyer to stop that (allegedly).

Feeds switched to Jessica finally breaking a bit about being nominated. She feels like the last one picked on the playground and it’s something she felt all season long. She has felt very alone in the house so naturally being nominated on the 10th week on a show she competed against thousands of applicants to get on is easily comparable to being picked last on the playground. I get what she’s feeling, though. Christie and crew have made a high school ‘cool club’ vibe in the house and Jessica wasn’t involved. Neither was Cliff, Nicole, Ovi, David, or Kemi and Sam,Bella,Nick to a lesser extent, but who are we to nitpick?

Alright, I vented enough tonight. It’s slow in the house but I’ll update if anything goes on. Until then, I’m going to go enjoy my Friday night by watching some TV