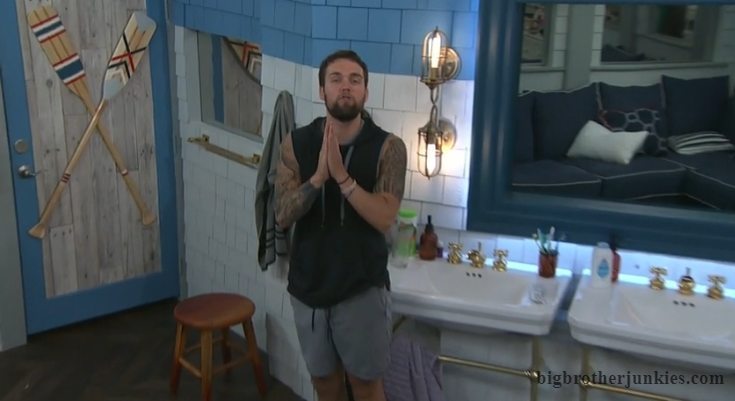 It’s Friday night in the Big Brother house and there is still a ton of tension between Nick and Christie which may make for another week of annoying back and forth arguing.

The two had a weird argument in the HoH today based on Nick telling Holly and Jackson that he thought he was safe from Christie or she was safe from him so she was going to throw the HoH competition. When Christie found out about it, she – once again – swore on her sister that she’d never throw a competition and had Nick come up. When confronted, Nick tried to swing it like it was a misunderstanding.  The two went back and forth in a very borderline argument but never quite crossing the point of yelling before it calmed down.

Unfortunately for Nick, this was likely after his nomination was locked so if he actually did nominate Jess, he probably wished he could have changed it. And what I mean by that is Nick somehow won the Prankster competition and thanked America (in the image above). I think he thinks he is super well liked now, but the reality is, people are really upset that Christie stayed and watched him argue with her on the show last night. I’m assuming they voted for him so he would nominate Christie and if he doesn’t, yikes.

I wrote that last paragraph while the feeds were down, and I’m going to pause writing now because I had hoped they would be up by the time I got to this point, but they’re not so I can’t talk about who has been nominated… yet.

Alright, feeds back and Nick did do the preemptive strike by nominating Christie.  Christie and Nick are on the block

5:35 pm – Feeds back. Christie and Nick are nominated.

Jackson thinks it may be Nicole who got the prankster. Cliff originally said Nick but they think Nicole as well

Jess comes up to the HoH room