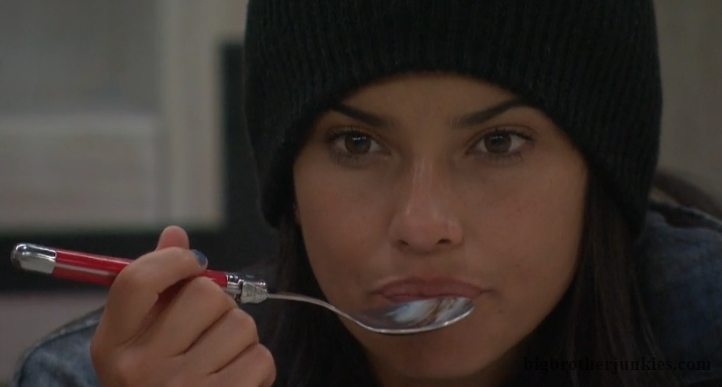 The above image is Sis struggling to think

After a wild night yesterday, today has been relatively quiet on the feeds. Tommy summed it up by saying he feels hungover from yesterday so I am guessing he’s not alone.

Jess stirred the pot a little today by nominating Jack and Jackson which I think was a decent move. If Christie didn’t have her power hanging around, other options may have been better, but this was one of the better choices to make. However, after thinking out the strategy throughout the day, it may have been a mistake and here is why. We’re now in a situation where if Jack, Christie, Sis, or Tommy win the veto, Christie can use her power. They can nominate Holly or Cliff next to Jackson and do exactly what Nicole didn’t want, eliminate the weaker side of the house. If Jackson wins the veto, we’re almost certain to see Sis next to Jack and Christie may just let that go and get rid of Sis (if she can).

Without Jessica’s longterm game in mind, the better move would have been to just throw up two of the four and be done with it. However, Jess knows she has only really Nicole and Cliff (and maybe Kat – if that) which doesn’t exactly scream power team. If Jess just throws Jack up next to Tommy, it will put a pretty big target on her back going forward. She may not be able to bury her head after this week and resume floating. So, Jessica playing dumb and just nominating the big guys, she largely avoids the target unless she has to break the tie.

So, Jessica’s move could very well come back to bite her if Jack wins the veto, but she may have been forced to make such a safe move because of her status in the house. Make sense? Not the overall best strategic move, but one of the better moves for her specific game.

Here are the current house details:

Right now on the feeds, Holly and Kat are still trying to convince Jessica they don’t know each other but the conversation is getting weird. I’ll watch along and update this if I don’t sleep but otherwise follow along in the comment section!