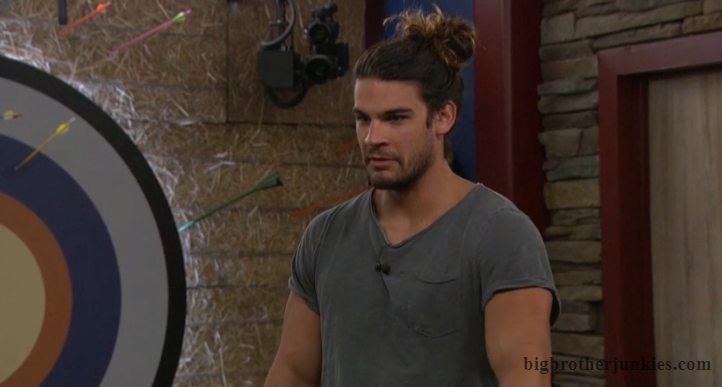 It’s time for a new HoH and time for the first person to hit the jury! Yikes. Jury time. The house had their midway party this week and now we’re at jury. Summer is going by too quick! Make it stop!

The week of Jessica is about to come to an end and thanks to her with a huge assist from Sam, the house is officially split up and BB21 is completely up for grabs. No more gra8ful or 6shooters running things. Jack should be gone and we’re going to be down to three groups of small and relatively weak alliances.

Kat can be listed with Jess, but I think she’s just more loyal to Holly in the end which is why I put her there.

Regardless, the house is fairly balanced now. Cliff’s alliance doesn’t really have much physical strength, but it has a lot of mental strength. Jackson’s has the physical but lacks mental. Tommy’s has a bit of both but neither is really a strong point.  I’m really looking forward to seeing how the rest of the season plays out with this group.

No chaos to open the show this week. Oh well. That was so fun last week.

They show the clips from the aliens. I hate that they weren’t on the feeds. The Jack/Alien skit was actually really good. He wrote ‘stupid’ under Jack’s nametag tattoo

Ok time for the speeches and eviction

Jack: He goes through each person and compliments them.
Jackson: Things have been said about him but he knows how he is. He won’t campaign against Jack. He says the Allen family should be proud of their daughter (Holly)

In the interview, Jack said he was going to stick with Christie over Jackson.

Julie shows the clips of Jack saying nasty things about Kemi. She recaps that Jack called Kemi a bitch and stomp a mudhole. Jack says it was based on what Sam said last season but was playful in a group of people. He then compliments Kemi and he doesn’t support the things he has said.  Julie THEN shows the clip about rice pudding. Jack says he appreciates letting him voice his opinion. He says it had nothing to do with her ethnicity.

Julie then says she is not going to ‘gyp Jack out of the good-bye messages’.  What.the.fuck.Julie.

Tommy is the new HoH

Julie didn’t mention any twists or DE upcoming, so the big thing this week is the field trip which will likely happen tomorrow.

Note – stomach bugging me. I’ll try to get up a new post before bed tonight recapping stuff

Overnight thread is up!