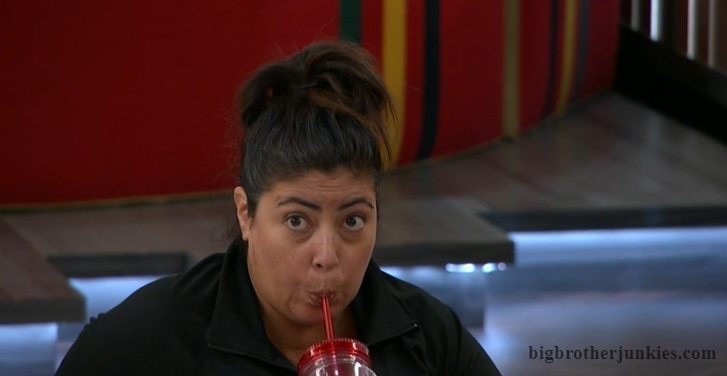 I know many fans are upset and rightfully so. Christie is not the most popular person in the house. Me? I like it! We still have more than a month to go in this season and I want to watch a house with Christie and Nick butting heads, not Sis sitting there doing nothing. I’m all about good feeds, but I do understand being fans of certain players.

Although, feeds have been down a big chunk of the day so maybe there was another house flip and Christie is back gone?  I doubt it. Jackson said he’s keeping her and his mind is made up. When has he ever changed his mind? Oh, wait again.

Tonight I am hearing they are introducing another fan thing where we vote for ‘prankster’, so we have more conspiracy theories to look forward to how it’s rigged for Christie or Cliff or whoever.

…. but first… a big thank you to everyone who has donated lately! As I mentioned before, I try to reply to each one but apparently PayPal stopped including emails so I’ve been replying to PayPal rather than the person.

Even though I watched it live, I loved the highlights of that fight. Hilarious

Bland speeches so nothing worth repeating

Julie says that last night they were told to study for the HoH, but Prank Week actually started

They got set up for a trivia competition but then Julie announced that was a prank and it’s actually going to be a skill competition. A wall opens behind them to a brand new set.

They have to roll a ball down a table and get it in a slot.

Julie tells them that we get to prank the HoH

Jessica gets punishment. Not sure about the second person. Could be all 3 (Nicole, Cliff, Jessica)

Holly wins HoH. Bye, Nick? I say that now but this season is crazy

Here is the link to vote

Nick winning would be hilarious!

That’s it for this thread. I’ll have a new thread up soon